Much happened in the semi-IP space this year, including growth, mergers and acquisitions, China, IP theft, RISC-V and Accellera standards. 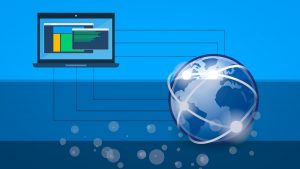 Image by mohamed Hassan from Pixabay

The world of semiconductor intellectual property (IP) – that critical element for any modern chip creation – faced several major challenges in 2019. Here are the top 6 which IP designers, verification engineers, users and providers should know:

Regardless of the numbers, the growth direction is up thanks in large part to increasing use of IP in complex SoCs for the automotive, consumer mobile, IoT, edge-cloud and even the AI markets.

That’s the good news. The not so good news is that the fabless companies – prominent in the IP supply chain – are taking a direct hit from the trade war with China (and others). For example, Qualcomm’s revenues were down 22% year-over-year in Q3, Broadcom’s were down 12.3%, Nvidia’s were down 9.5%, reports TrendForce.

The only two US fabless companies to enjoy revenue increases were AMD and Xilinx. As a result of the continuing shortage of Intel CPUs, AMD was able to expand its shares in the notebook and PC markets and subsequently increase its 3Q19 revenue.

During the Sunday evening, pre-DAC 2019 keynote, Rich Valera from Needham and Company noted that since the collapse of the tech bubble in the early 2000’s, the EDA market has been all about consolidation. Since EDA tools growth is closely tied to IP sales and R&D spending, this means that IP in the chip community is also affected by these consolidations.

It should be noted that Figure 1 does not include many of the more recent 2019 consolidations:

Semiconductor M&A activity accelerated in the first eight months of 2019. The combined value of about 20 M&A agreement announcements reached $28.0 billion for the purchase of chip companies, business units, product lines, intellectual property (IP), and wafer fabs between January and the end of August. An analysis in the September Update to IC Insights’ 2019 McClean Report shows the dollar value of semiconductor acquisition agreement announcements in the first eight months of 2019 surpassed the $25.9 billion total for all of 2018 and was close to topping the value in 2017 (Figure 2). 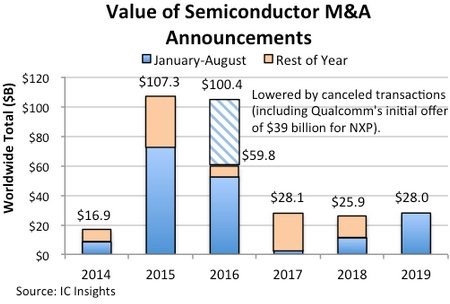 One way or another, China had a significant effect on semi-IP in 2019. I already mentioned the negative effect of the trade war on IP. Let’s consider a few other drivers.

China is serious when it comes to dominating the chinese (and global) chip design and fabrication market. The countries “Big Fund” program is moving to its second phase of function through the creation of an entity called the National Integrated Circuit Industry Investment Fund Phase II Co. Compared to its Phase I that began five years ago, Big Fund Phase II is twice as big at 204.15 billion yuan ($28.9 billion).

It looks like money’s from Phase II will focus on the semi manufacturing process, e.g., etching machines and film, test and cleaning equipment. The goal is to build an independent, self-sufficient and “controllable” industrial chain for the Chinese IC industry. Achieving this goal won’t be easy as there are no strong Chinese players in high-end photolithography. For now, China is heavily reliant on foreign fabs. It would be best for the semi community to keep an eye on the political situation at TSMC.

On the cautionary side, it should be noted that energy technologies and companies were targeted in China’s previous 5-year plan. As a result, only a few of the once numerous US and European solar and wind farm companies remain in business today.

Which brings us to the ongoing but critical challenge to IP in 2019, namely, its theft. Recently, Trump’s economic adviser Larry Kudlow stated on CNBC’s Squawk Box that China has stolen at least $600 billion in American IP.

One example from earlier this year was the acquisition that the leading Chinese telecom giant Huawei stole critical US technology-based IP. In response, the US government banned companies from using Huawei equipment in its 5G infrastructure.

Conversely, others claim that major Silicon Valley’s big tech companies are a bigger IP threat than China. The claim is that the big US tech companies are stealing IP from smaller tech shops, using the USPTO’s Patent Trail and Appeal Board (PTAB) to invalidate their patents. The real damage results from the lawsuits that take years in court to settle, thus driving the small companies out of business. Some see the recently passed America Invests Act (AIA) as the reason for this current dilemma.

Here’s an interesting twist on other IP lawsuits: Earlier this year, the University of California system sued Target, Amazon, Walmart and other retailers for patent infringement on LED filament bulbs designed by University researchers. The twist is that, instead of suing the country (e.g., China) that stole the LED IP and then manufactured the bulbs, the university is suing the sellers.

Clearly, going after the US retailers is much easier than bringing a lawsuit to Chinese manufactures who knowingly or not sold products based upon the stolen IP. Also, the university probably didn’t want to accuse the Chinese directly with a lawsuit for business and political reasons. The outcomes of this lawsuit will be worth watching.

In related news, mostly personal data theft has risen to dizzying heights. In 2018, there were 500 million personal records stolen, according to the Identity Theft Resource Center. That number was miniscule compared to the 7.9 billion records exposed in 2019 by over 5,000 breaches, as reported by Risk-Based Security.

The RISC-V processor is the only processor that has a completely open source instruction set, which controls the way the processor handles all its processing. This allows companies to tailor the RISC-V core for their unique product purposes which, in theory, will lead to lower business and consumer costs. For example, SiFive – a prominent RISC-V supplier – introduced several new products this year targeting various size, weight and power optimizations of the RISC-V in the mission critical and AI markets.

Even the open source RISC-V foundation is not immune to this year’s politics. The foundation is moving from Delaware to Switzerland to lessen foreign members’ fears of possible disruption to usages of the open-source technology. The reasons for this move stems from the concern of US politicians about the Chinese working on RISC-V. The foundations works to oversee the setting of the standards for the technology which was developed by UC Berkeley with DARPA funding. DARPA has indicated that it provided the funding with the intention that the technology would be used worldwide.

Work is currently being done by two Accellera IP standards:

The IP Security Assurance group (IPSA) is tasked with defining an IP Security Assurance Specification. The Working Group will provide a security assurance standard for hardware IP and its associated components to address security risks when integrated into embedded systems. At this time, there is no single standard that addresses security assurance in the development and delivery of intellectual property (IP) to Silicon integrators. With this new standard, user companies will have higher confidence that IPs have addressed security concerns at the integration level.

A detailed whitepaper outlining the IPSA group’s task and path forward was released in September of this year. Among other things, the whitepaper introduces IPSA’s new components to be added to an IP’s delivery collateral: 1) Asset Definition, 2) Attack Surface, and 3) Threat model informed by the common IP security concerns (CIPSCE) knowledge base (see Figure 3). The latter was apparently modeled on the MITRE Common Weakness Enumeration, widely accepted as the reference for software security weaknesses. The hope is that the CIPSE model will serve as a good template for the hardware security model under development.

By analogy, this is probably not a bad approached as it worked for the transition from the software-based capability maturity model (CMM) to a more systems level, hardware-based CMM-Integration (CMMI) model years ago. (I worked on the latter in the late 1990s.) 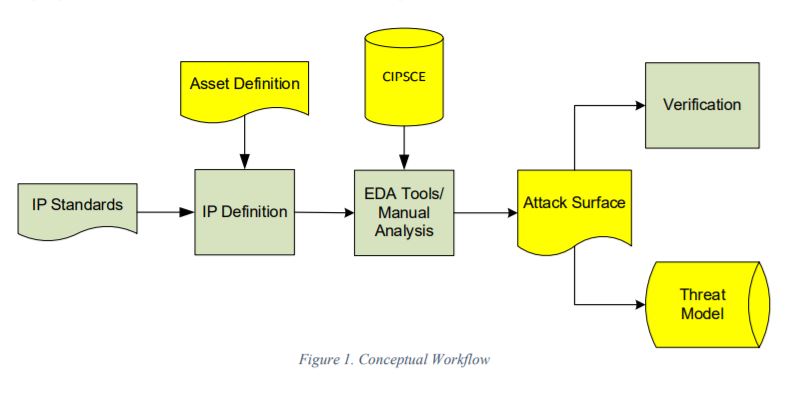 The IP-XACT working group is currently updating the previous version of the standard. The purpose of IP-XACT is to, “provide a well-defined XML Schema for meta-data that documents the characteristics of Intellectual Property (IP) required for the automation of the configuration and integration of IP blocks; and to define an Application Programming Interface (API) to make this meta-data directly accessible to automation tools.”