The Mayflower Steps, where the Pilgrims are believed to have embarked on their journey to America, are located in the beautiful Barbican area of Plymouth, a small town in the southwest of England. As the lone American working for Moortec, a British company based in Plymouth, I stood and stared at them this past September. Separated by a few yards of distance but 399 years of history I found myself contemplating what the Pilgrims would think of our reality and how it compared to their own. As those brave souls stepped onto a tiny boat for a very dangerous and months long voyage across the ocean, what would they have thought of the technology that would have allowed them to cross that gap in hours, or talk instantaneously with someone halfway across the globe. But as different as our worlds are one absolute constant across time is the need for test, and failure to do so had a profound impact on their now famous journey.

At the recent Silicon Valley DFT and Test Conference I gave a talk entitled, “Real World Challenges of Today and Tomorrow on Advanced Node Technologies” in which I made the case that as critical as testing is to handling modern design challenges, the need for test is at least centuries old. The example that I used was that of those same Pilgrims coming to America, and how their experience 399 years ago demonstrates truths that are still relevant today.

In order to understand the Pilgrim’s need for test, we have to go beyond what was my limited grade school understanding of how the Pilgrims got to America and discover the real story. My recollection was simply that the Pilgrims left Plymouth on the Mayflower and sailed to America, landing, conveniently enough, at Plymouth Rock. While that is technically mostly true, there is actually much much more to the story. 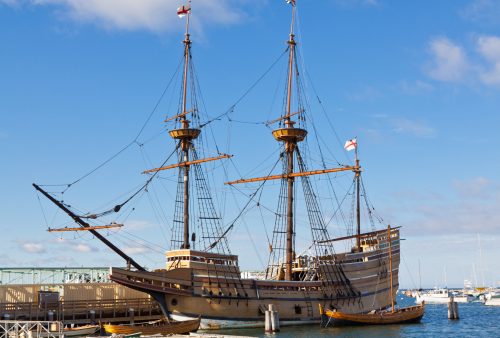 “The Mayflower II is a replica of the 17th century ship Mayflower, celebrated for transporting the Pilgrims to the New World.”

In the historically accurate version of our tale we start with our heroes living in Leiden in the Netherlands where they had gone to flee religious persecution. Where was the Mayflower? It was in London, where it was hired by the Pilgrims to go to Southampton to load up on supplies and wait for them. So how did they get to Southampton? They left Leiden and journeyed to Delfthaven where they boarded a ship. The name of this ship, like that of the fifth Beatle, is not well known.

The verification Pilgrims didn’t do their job…

The name of that second Pilgrim ship was in fact the Speedwell, and here’s where testing comes into play. We don’t know exactly what happened – maybe the proper documented test procedures weren’t followed, or perhaps in their haste to get to the New World they took shortcuts, or maybe the verification Pilgrims simply didn’t do their jobs. Whatever the reason was, because the ship wasn’t adequately tested, they found as they sailed to Southampton that the ship leaked (insert obligatory joke that their leakage problems were infinitely more intense than our leakage problems of today).

Once they got to Southampton they made repairs, and with the ‘B0’ version of their ship they sailed off with the Mayflower to fame and fortune in the new land, because as everyone knows it was the Mayflower and Speedwell that sailed from Southampton and into the history books… yeah, no. Shortly after setting sail from Southampton the Speedwell began leaking again, so they had to stop in Dartmouth – slightly closer to America, but still an ocean away from their destination. But never fear, they made repairs yet again and in their ‘C0’ ship took off and as we all know the Mayflower and Speedwell sailed from Dartmouth into… yeah, still no. Because this time they got about 300 miles out to sea before having to turn back because the Speedwell was leaking again, and it was at this that time they landed in Plymouth. And it was in Plymouth that they made the decision to give up on the Speedwell, transferred supplies and people to the Mayflower, and took off for America. 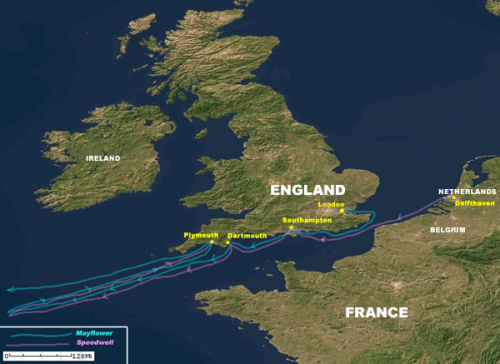 The not-so hidden cost of failure in test

OK, so our intrepid explorers had to leave behind a ship. So what? As it turns out the impact was rather significant. First, some of the Pilgrims had by this time had enough of delays and simply turned around and went home. The remaining 102 Pilgrims had to cram, with all of their supplies and worldly possessions, onto a single ship along with 30 crew for the 66-day journey to the New World. And it would not be an easy or comfortable journey. Given the constraints of the ship travel at the time and the confines of the Mayflower, our 102 brave souls were confined to a space less than 58’ x 24’ (18m x 8m), and only 5’6” (1.7m) tall for the entire journey. Worse still, once they landed in America some had to live there for months longer while building permanent housing. Brutal conditions, and all avoidable, had they done proper testing at the beginning of their trip.

Returning to the present time it’s probably not the case that the ramifications of a failure in test would be so catastrophic. But given the tens of millions of dollars to develop a modern SoC the effects of failure, either at design time or in mission-mode in the field, are certainly costly. So, we simply must take advantage of all of the modern techniques at our disposal, including in-chip monitoring, lest we fail to learn the lessons that centuries of history should have taught us.

You can learn more about our ‘verification Pilgrims’ and follow the 400th anniversary celebrations throughout 2020.

View all posts by Lee Vick

Lee has a wealth of experience within the semiconductor industry across sales, business development, and engineering roles. During his 15 years at Tensilica (acquired by Cadence in 2013) he worked most recently as Global IP Sales Manager where he managed all processor IP activity at Intel, and previously as Director of Strategic Planning and Director of WW Field Applications Engineering among other roles. He has also served at Intel as a strategic planner responsible for long -term roadmaps for all PC CPUs and chipsets, and in engineering and architecture roles at Compaq, TI, and the Dept. of Defense. Lee has a BSEE from the University of Texas.