The importance of a comprehensive, low power design philosophy for all future microcontroller, microprocessors and server systems was the guiding theme behind Dr. John Heinlein’s opening presentation at the DAC “IP Talks” sessions. 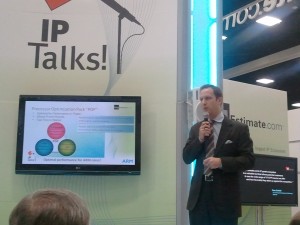 Technology has come a long way since the era of mainframe computers in the 1960’s. Back then, the chip design emphasis was focused on the functional performance of the machine. Later, when desktop PC’s arrived on the scene, the design emphasis shifted to cost and affordability. This helped to greatly expand the consumer market for computers.

The effect on today’s processors has been cumulative. For example, notebook computers are still about performance and low cost but with the additional requirement of low power and long battery life. Power is also critical for other mobile devices like tablets and smartphones.

The next wave of technology will be very energy conscious, explained John Heinlein, VP of Marketing for the Physical IP Division at ARM. Heinlein shared these observations during the kick-off ChipEstimate “IP Talks” session at the Design Automation Conference (DAC).

“Low power will be a driver for the future, from 8-bit microcontrollers to PCs and all the way to high-performance servers,” noted Heinlein. Low power has become so important that is part of the overall design philosophy for semiconductor chips.

He cautioned that this philosophy was in direct contrast to performance or speed binning, which some companies used to determine the maximum performance speed – operating frequency – for a given set of manufactured processors. The speed binning technique is commonly used in conjunction with graded pricing, where the highest performance chips are sold for the most money.  Heinlein emphasized that speed binning is not good enough for the large and expanding mass-market of embedded, desktop and server processors. He said that ARM supports higher performance, low power computers from a top to bottom design philosophy, not through the use of speed binning.

In the near future, energy generation and consumption will increase markets for solar energy and energy harvesting technology. Innovation gains in these areas will increase the spread of ubiquitous computing. Future challenges for low power systems will be limited energy storage (battery) technology and insufficient charging speeds.

The growth of embedded, Internet connected computers in more and more devices has lead to strong growth in microcontroller sales. Heinlein cited one example of tiny, very low power microcontrollers that are nused in motor control to align power busts with motor shaft rotation speeds. The goal for these smart systems is to improve the energy efficiency of the motors.

Other examples included smart metering, heating and air-conditioning systems. One advantage that ARM brings to the traditional 8-bit microcontroller market was the combination of 32-bit controller performance at an 8-bit price points, Heinlein said. “The market for microcontrollers sales at ARM should reach 19 billion units by 2015.”

Low power will also be critical for the high-end smart phone and server markets. Today’s mobile smart phones have up to 9 CPU cores as well as specific graphic and video processors. All of the cores are connected with high-speed bus networks and controllers, such as those supported by the AMBA bus architecture.

Heinlein shared several announcements from ARM during his talk, including the new AMBA 4 specification, which optimizes coherency for heterogeneous multicore SoCs. Cache coherency is important for bus communication amongst multicore processors for smart phones and other devices.

In summary, Heinlein noted that the future growth for Internet connected, low power processor technology should be phenomenal. He based his opinion on the fact that, of the 6.8 billion people on the planet, 2.2 billion don’t have mobile phones and over 5.1 billion don’t currently have Internet access. Most of these future consumers live in emerging countries without a wired infrastructure. This means that low power, energy efficient wireless connections will be the only way these consumers can connect to an already connected world.