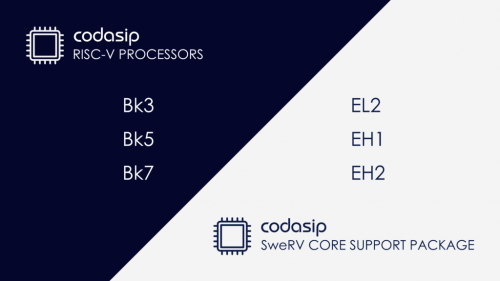 Three of the cores, the SweRV Core™ EH1, EH2 and EL2, were designed by Western Digital and were open-sourced through CHIPS Alliance. These 32-bit cores are mainly aimed at high-performance embedded applications and complement the existing 32-bit Bk3 and Bk-5 cores. The EH1 offers outstanding embedded performance due to its superscalar, dual issue architecture. Even more performance is delivered by the EH2 which provides two hardware threads (harts). The EL2 core is more compact and is a single-issue core.

The RTL for all three SweRV Cores is available on GitHub free of license fees. However, RTL alone is not sufficient to use a SweRV Core in an SoC design. Firstly, a complete software toolchain is needed to allow embedded software to be developed. Secondly, a comprehensive EDA design flow needs to exist to undertake simulation, static analysis, and synthesis of the core’s RTL. It is important that the core can be easily integrated with peripherals, memories, and buses in order to implement a sub-system. EDA design flows need to keep up with revisions in both the processor IP and the EDA tools.

In December 2019, Western Digital and Codasip announced that they were cooperating to enable the deployment of open-source SweRV Cores in production silicon. Codasip’s SweRV Core Support Package provides all of the components necessary to design, implement, test, and write software for a SweRV Core-based system-on-chip, including but not limited to verification testbenches and intellectual property, reference scripts for leading EDA flows, models for simulation and emulation, and software development tools.

The Support Package is available in a Free version consisting of open-source components and mainly aimed at academic use, and in a Pro version aimed at commercial SoC design using commercial EDA tools. The SweRV Core Support Package for EH1 was released in April and support for EH2 and EL2 was added in June. In addition, Codasip offers services for customizing SweRV Cores.

Although the semiconductor industry regularly talks of comparing processor cores in terms of performance versus complexity or in terms of PPA (performance, power, area), both performance and complexity have different aspects. Many Systems-on-Chip (SoCs) use multiple cores and face different requirements for different functions. For example, a core for a subsystem such as Wi-Fi will have quite different needs to one running a feature-rich OS such as Linux.

The Codasip Bk7 RISC-V core, announced yesterday, is Codasip’s first application processor. Like all previous Bk core designs, it has been designed in the Codasip Studio processor design system. This means that its architecture can be readily modified to create application-specific processors.  It has all the features needed for running embedded Linux and will be the cornerstone for further application processor developments. The Bk7 core is a 64-bit core with a 7-stage pipeline and memory management unit (MMU). Future versions of the Bk7 will support symmetric and heterogenous multi-processing.

In future posts we will be looking into some of the different facets of processor performance and complexity in order to see how the expanded Codasip offering can be applied to varying applications. We will also provide more detailed information on the Bk7 processor core.

View all posts by Roddy Urquhart

Codasip is a leading supplier of processing solutions for IC designers. Codasip offers solutions based on open standards and is a founding member of the RISC-V Foundation and was the first company to offer a commercial RISC-V IP core in 2015.\r\n

Roddy is the Senior Marketing Director at Codasip. He has over 30 years of experience in international sales, marketing, business development and general management in the electronics industry. He holds a PhD in pattern recognition from the University of Glasgow and is interested in processors, DSP and machine learning.