The June issue of the Travelogue takes place at the Design Automation Conference (DAC) 2018. Editor John Blyler (left) talks with Chipestimate.TV director Sean O’Kane (right) about the fate of the DAC, continuing confluences of Moore-Metcalf Laws, radiators for electronics vs. gas engines, simulated reality with haptics, and the irrelevance of GPS tech to the Lost-in-Space robot. Please note that what follows is not a verbatim transcription of the interview. Instead, it has been edited and expanded for readability. Cheers — JB 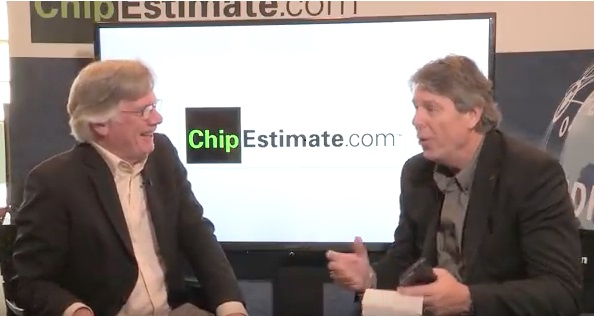 Sean: Here we are at another DAC. Do you think the consolidation of the market has affected this EDA tools conference?

John: We’ve been covering this show for a whole lot ‘a years. But recently, there have been rumblings that the ESD Alliance is struggling financially because of the consolidation in the EDA space and lack of start-up companies. (Recall that in 2016, the EDA Consortium changed its name to the Electronic System Design Alliance. This was done to reflect a shift to semiconductor intellectual property (IP) and other areas outside of classic EDA tool technology.)

John: Not at first glance. SEMIcon West is a capital equipment show, not a chip design or verification conferencet. Granted, SEMIcon West has been trying to branch out to other markets with its SMART initiative, e.g., smart transportation, manufacturing, etc. Also, SEMIcon West is primarily a trade show, not an academic event like the DAC. Time will tell.

Sean: Moving on – let’s talk about another show taking place during the same week as the DAC, namely, the Sensor Expo. Why has that show caught your attention?

John: This show caught my eye because of evolving IOT technology. Connected sensors require chips – specifically wireless chips. And the market potential is huge, from smart cars and smart manufacturing to smart farms and medical. In particular, though, there will be a panel discussion on a topic I’ve covered for Chipestimate.com in the past: “IoT – Where Moore’s Law and Metcalf’s Law Collided – A Supernova of Activity or a Black Hole?” (Figure 1). 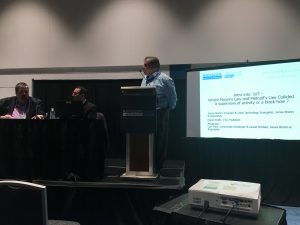 Sean: I remember one Chipestimate.com blog: “Will Moore’s and Metcalf’s Laws Be Enough to Cross the Chasm?”

John: Yep, that was the first one. I’ve recently written an update for Informa-Penton’s Electronic Design: “Will Moore’s and Metcalf’s Laws Doom the IOT to the Dotcom Fate?” Basically, The key to applying Metcalfe’s Law is to properly estimate the value of providing connectivity. Increase connectivity will increase the value of the IOT sensor connected networks up to a certain point. Beyond that point, the cost of growing the network will overwhelm its value. When that happens, another famous law will take over, namely, the Law of Diminishing Returns.

Also in the realm of IOT, I had an interesting hallway talk at the DAC with Rich Wawrzyniak from Semico Research. He made the observation that some autonomous vehicle applications require so much real-time processing power that the processors might need to be water-cooled (see Figure 2). 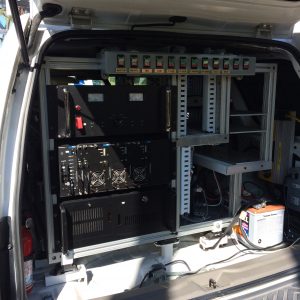 I found Rich’s comment thought-provoking. So, by moving to autonomous, connected electronic-vehicle cars we shift the need for water-cooling from the gas-powered engines to the electronics. Guess Moore’s Law for power electronics doesn’t match up to the “Law of Radiators” for mechanical-chemical gas-powered systems.

Sean: Aside from conferences, what new technologies have you been seeing?

John: Everything from the rise of co-bots to human augmentation and Lost-in-Space type tech.

Sean: OK, I know that co-bot is short for collaborative robots, i.e., robots that work side by side with humans without harming them. What human augmentation tech have you seen?

John: Lots! I just finished a chapter in a Mouser ebook on the topic: “The Complexity of Mimicking Humans is Just the Beginning.” (see Figure 3). I don’t want to talk much about the ebook chapter until it is released so let me share tech that I saw at the Display Show last month. It’s called Simulated Reality. The goal is to replace all sensory inputs with simulated experiences. We all know about 3D visual virtual reality systems. How about a virtual haptic (or feeling) experience? Unlike visual inputs, haptics are not accomplished with displays but with ultrasound. More sensors simulations will follow in the next 5 years (see Figure 3). 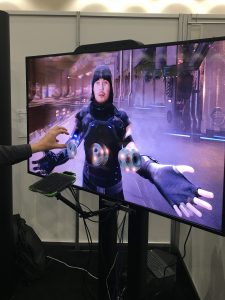 Figure 3: Dimenco’s proof-of-concept demonstration at Display Week 2018 highlighted plans for immersive simulations that can be experienced without wearables, head-mounted displays or glasses.

Sean: And the Lost in Space reference? Does that have anything to do with the new Netflix show?

John: Indirectly. I wrote a blog on the evolution of robotic mobility technologies, specifically those needed for balance, motion, and location awareness. The Internet is full of videos of strange looking robots that can walk over challenging terrain without falling down – or getting up once they do. The real crux is that non-terrestial robots – like Robot in the Lost in Space show (see Figure 4) – cannot rely on Global Positioning Satellites (GPS) to tell them their position on a planet. They must have self-contained internal systems. 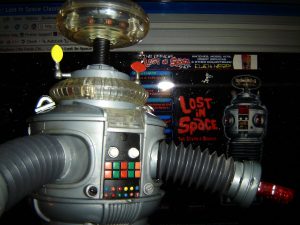 Figure 4: The Robot from Lost in Space probably didn’t use GPS! (Courtesy of Joamm Tall At Flickr Creative Commons https://www.flickr.com/photos/nuthinfancy/ )