Routing today’s complex printed circuit boards is a lot like playing a game. Maybe board developers can take a lesson from SETI.

Have you ever routed a circuit design for a printed circuit board? It’s essentially a task of connecting dots with lines – lots and lots of lines. In the vernacular of PCB design the dots are call pads or vias and the lines are called traces.

Oddly enough, the task can be fun. Indeed, it is an exercise that has become gamified thanks to mobile phone apps like “Pipes” and others. In Pipes, you try to connect two same colored dots (pads) via a pipe (trace). The complexity of the connections increase as you get better at creating these connections (routes).

Gamification is the act of changing a traditional non-game activity into a game. I have written about its importance to the world of semiconductor IP development in the past, albeit from a different angle than this discussion. [see, “IP Developers Will Play Games,” and “Interview with Gabe Zichermann on Gamification“]

Maybe Mentor and Cadence – both who have major PCB development tools – should gamified the routing of PCB designs. This activity might greatly expand the productivity of board development with the side benefit of educating the public. The major board designers could follow the example already established by SETI, which uses Internet-connected computers in the Search for Extraterrestrial Intelligence (SETI). Instead of aliens, the connected computer users would be playing a game of Pipes. In actually, they would be routing extremely complex circuit boards. It’s just might work! I’d call it “Routing for Fun” or RoFu. 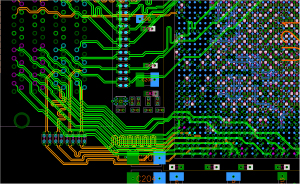 Routing circuit boards for fun would give the consumer users a stake in the electronics game by allowing them to layout their next smart phone. Naturally, design rules would apply as they do in both PCB design tools and the games.

There might be financial benefits as well. PCB design gamification would add a new dimension to the word “share-holders.” Game on!