Yes, it’s Tensilica’s birthday! Twenty years ago today, on July 31, 1997, Tensilica was officially incorporated by Chris Rowen, who I knew from our Synopsys days when he was VP of the Design Reuse Business Unit.  I started working with Tensilica (as a PR consultant) when there were eight people in the office next to the Duke of Edinburgh pub on Wolfe road in Cupertino. I became a Tensilica employee in 2002, and worked for Tensilica until it was acquired by Cadence in 2013.

You can read a lot more about the history of Tensilica in Paul McLellan’s Breakfast Bytes blog, and get a peek at the first business plan.

Tensilica rode the Internet wave, with a truly innovative processor generator that was available only via the Internet. Using that generator, designers could configure and add instructions to a Tensilica processor. The magic was that the processor generator made sure (it still does) that no one breaks the architecture, and that the resulting customized processor is correct by construction.  More magic was in the results – design teams were getting 10-100x speed ups of critical algorithms by tailoring the processor to the exact software application.

Since the initial processor introduction, the Tensilica team has significantly improved the processor and the tools used to generate a processor. Additionally, they have created standard DSPs for common applications that have wide market appeal. The industry leading Tensilica HiFi Audio DSP family is now the de facto standard for audio applications, with over 90 software packages already ported and optimized for this architecture from industry giants like Dolby and DTS to smaller companies offering innovative sensor fusion, always-on, sound enhancement, and noise-reduction software.

How does the Tensilica team, now part of Cadence, keep up with such innovative technology?   It takes a fantastic team, dedicated to innovation, to fuel the Tensilica success.

I have never worked with such a smart team of people, most of which are still with Cadence four years after the acquisition. I saw this in the R&D team working on new features for the processor generator. I saw this in the sales and application engineering teams, which tackled the challenge of getting new customers to adopt a revolutionary technology.

I saw it in our marketing team, which tried some very innovative ways to capture people’s attention (anyone remember the SozBot cage we used at the Embedded Systems Conference? We actually sponsored a SozBot ProAm event, right in our booth – see video below.) 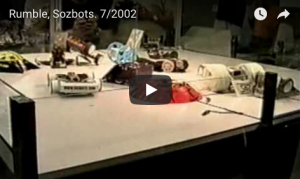 Yes, it takes creativity to come up with something that’s truly different – and really works! Happy Birthday Tensilica team!

View all posts by Paula Jones

Paula Jones is Group Director, Corporate Communications at Cadence. She joined Cadence as part of the Tensilica acquisition in 2013. Previously, she was director of corporate communications at Synopsys and a bunch of other places.