The recent IEEE technical conference provided a detailed look at research into leading semiconductor and nanotechnology devices across many domains.

Unlike many semiconductor-related conferences, the IEEE International Electronics Device Meeting (IEDM) contains no exhibitor hall. The entire meeting is dedicated to keynote addresses and technically detailed research papers presented by experts in the fields of micro and nanoelectronics. Covering such events can be challenging since it requires both a breadth and depth of engineering expertise. That’s why I’ve decided to stretch my reporting comfort zone to highlight a few of the under covered aspects of the show. But before that, let’s examine a few of the mainstream topics.

As expected, the dueling chip giants Intel and IBM presented their differing 14nm FinFET substrate strategies. Intel manufactures their leading edge transistors on a standard bulk silicon substrate. Conversely, IBM favors the use of an insulating substrate known as SOI, a more expensive material but one that makes it easier to ensure device isolation. By isolating the active transistor from the rest of the silicon substrate , chip designers can reduce the electrical current leakage that would otherwise degrade the device’s performance.

It should be noted that, as of last year, GlobalFoundries announced their intention to acquire IBM’s semiconductor manufacturing division.

The issue over which substrate is best remains a long-standing debate that will likely be decided in the marketplace. (see, SOI Parity with CMOS Good News for IP Designers) 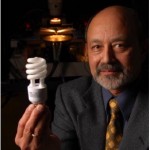 There were many papers at IEDM on FinFETs design, substrate materials and device manufacturing issues. Additionally, there were four special focus sessions that covered power devices, Bio-MEMS, advanced displays and analog circuits.  One of the more unusual presentations dealt with the societal impact of power semiconductors, delivered by Professor Jayant Baliga of North Carolina State University (see Figure 1). Dr. Baliga, the inventor of the insulated gate bipolar transistor (IGBT), claims that such devices have helped reduced gasoline and electricity consumption by enormous amounts.

Unlike the ever-decreasing power requirements of leading edge 14nm FinFET transistors, IGBT devices are used to control high-power systems. An IGBT is a power transistor with a MOS structure for an input and a bipolar one for an output design. These devices are used for high voltage and high current applications by controlling high power with less drive power. IGBT technology is figuring prominently in the rebuilding of legacy energy and transportation vehicles. For example, a Cambridge, UK, start-up called Amantys is bringing state of the art IGBT technology to existing locomotives. (see, “How Will The Next 50 Billion Devices Shape Our Future?”)

Here is but one example of the way in which IGBT’s help to reduce energy consumption (see Figure 2). According to the U.S. Department of Energy, artificial lighting consumes about 10% of household electricity use. A typical compact fluorescent lamp (CFL) with its supporting IGBT-based electronics in the base is shown in Figure 2.  CFLs have been demonstrated to reduce energy consumption by 80 percent while operating for 10-times the lifespan of incandescent lamps. According to Baliga, Motorola (On-Semi) has shown that the IGBT offers the most cost effective power device technology for use in the electronic ballast of CFLs when compared with bipolar power transistors and power MOSFETs.

Let’s move from power electronics to bio systems. One IDEM paper dealt with mechanobiology for MEMS at a molecular level to stress cell elasticity as a measure of diseases. Another paper used CMOS image sensors to read optical tags places on DNA base nucleotides for faster, cheaper DNA sequencing. I’ll have more on these topics in a future blog.

From leading edge transistor design and manufacturing research to power electronics and mechanobiology systems, IEDM continues to cover the hotest topics in semiconductor and related domains.