IEEE-IMS was Busy and Productive for RF and MW Developers

Highlights from the major IEEE RF and Microwave show include the purported death of GaAs, non-CMOS stacked die, women engineers, and microapps.

Reports suggest that attendance was healthy for a region that’s not known for its abundance of MW and RF engineers. Academics presented their latest works to a focused audience. And most attendees, partners, and exhibitors seemed pleased with the event.

One of the panel sessions had the catchy title, “The Death of GaAs.” This technology has been essential in the rapid growth of wireless communications. But silicon-based technologies like RF CMOS (think Qualcomm front ends), SiGe, and silicon-on-insulator (SoI) are challenging the GaAs domain in the high-volume mobile market segment. Further, technologies like GaN are seeing wider deployment in aerospace and defense applications. Products using these alternative technologies pose increasing challenges to the GaAs device industry. The panel speculated on the future of the GaAs market, concluding that it still has a role to play.

This panel was covered in Patrick Hindle’s blog and follow-on discussion in the LinkedIn RF-Microwave Community. He made two points in his write-up that caught my attention. The first point concerned SoI and Silicon-on-Sapphire (SOS) switches, which – thanks to their lower cost – seemed to be replacing GaAs in many designs. Hindle clarified that trend by noting that, “SoI switches are widely replacing GaAs switches in handsets, while GaAs continues to do well in higher-performance applications” (see “CMOS and SoI Invade RF Front End“).

Another interesting point from Hindle was inspired by a DARPA presentation about combining InP HBT, GaN, and MEMS on the same platform. To me, the project seems like another implementation of 3D stacked-die technology, sans the more typical processor and memory dies. If that is true, this would be an interesting twist on the more common silicon-based CMOS stacking trends. 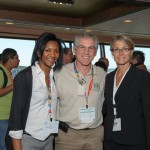 On the exhibitor side of the show, AWR’s VP of Marketing, Sherry Hess, hosted the gifting of AWR software to the winners of the company’s SDR and PA student design competitions. She noted that the Microwave Application Seminars (MicroApps) – 20 minute technical presentations given by the exhibitors – were well attended. “We had 30+ in the audience for each of AWR’s talks,” she said, where topics ranged from simulation to design methodologies.

One of the big events on the social side of the show was the Women in Microwaves reception, held in Seattle’s iconic Space Needle. As co-chair of the IEEE’s Women in Engineering (WIE) group and longtime advocate for women in engineering, Hess was pleased to see that the reception – collocated with the HAM Radio gathering – topped 300 in attendance. According to Hess, another big social event was the annual AWR appreciation party, which had record attendance of nearly 1000 people.

All in all, IMS 2013 seemed to have been reasonably well attended with lively technology discussions and great social events in the evening. As Hess said, it was a busy, productive, and exhausting show, but the time was well spent!

Personally, I’d love to attend next year’s show in Tampa, Florida – but only if it is not once again held on the same week as DAC.