Chip Signal
Industry Blogs
get the latest news and advice for everything IP
World’s Most Trusted IP Resource
Home  >  Blogs  >  IOT: Are We There Yet?

IOT: Are We There Yet?

One of the invited talks that we had at CDNLive was by Somshubhro Pal Choudhury, partner at Bharat Innovations, a startup venture fund aimed at innovative, IP-related startups out of India. Som is actively involved in the IESA’s Internet of Things (IOT) Special Interest Group as well as various other IOT initiatives, and has vast knowledge about the IOT scenario in India.

Som’s talk has so much interesting information that we are going to split it into an IOT series. This is the first of them, which talks about the IOT stack, hype cycle and some of the trends.

And to answer the question posed as the title of this blog: we’re not yet there, but we’re making good progress. IOT is a long, long road and we are at the first toll gate.

Som started by tracing the history of the computing cycle, from being device and hardware-centric in the ‘80s and ‘90s, to being network-centric in the 90s, and then to being application-centric since around 2000. The next phase, he says, is the AI and data-centric world, which we are about to step into. What’s interesting is that during each of the transitions, there were 10x more users per device – you can make the leap of reasoning as to why AI and data analytics are so important today.

When I first talked to Som about speaking at CDNLive, he mentioned the IOT Stack as one of the things he has written about. I was immediately taken with the term and imagined a pile of sensors, applications and devices like a stack of pancakes! Turns out it is actually a bit like that, though Som has envisioned it as an hourglass rather than a stack. 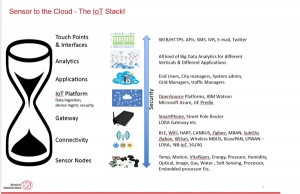 It encompasses everything from the sensor to the cloud. It starts with sensor nodes (sensing motion, pressure, vital signs and so on), uses a connectivity layer (protocols such as 3G/4G, ZigBee or NB-IoT) to link to the gateway (a smart phone or street pole router). The IoT platform (OpenSource or Azure or any other) which is about data ingestion, device management and security comes into play here, and applications (for grid managers, system administrators and end-users) make their appearance on top of this platform. All kinds of data analytics for vertical and different applications take their position here, and finally, close at touch points and interfaces (such as e-mail, Web/HTTPs). The middleware stack of the IoT comprises the gateway and the IoT platform. And of course security embraces all this, from sensor to cloud.

Gartner’s “hype cycle” graph is well known, but in case you are not familiar with it, here it is: 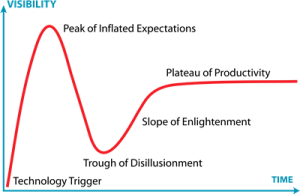 Applying the hype cycle to IOT, Som said that just as IT changed the world in the past 20 years, IOT will do so for the next 10 years, even if the ramp up will be slow. Som’s analysis is that since IOT is the combination of so many individual technologies, it’s hard to pinpoint exactly where it is in the hype cycle. He said, “The concept of IOT platforms which was a rage…is coming down the curve. The concept of sensors is all over [the cycle]. Some of the sensors are at very early stage of R&D, some of them are reaching the maturation curve going through the journey, and the concept of analytics and AI is still very new.”

According to Som, the concept of the IoT itself has been happening for generations – think automated meter reading, for example. Why do we now call it IOT and why is there so much funding that is going into it?

Som said that the reason for it is threefold:

One of the most notable things about IOT is traditionally technology startups have been born in Silicon Valley. However, in the case of IOT, companies are all over the world – Som called it “a true democratization of technology”. The funding too has been widespread, evidenced by around 86 exits in the last 18 months, most of them from non-tech companies such as insurance, oil and gas, utility companies.

So why are these more traditional industries jumping on the AI, analytics and IOT bandwagon? Som feels that they are reacting to the onslaught of technology by accepting technology to stay ahead of the game. This makes for an interesting future for the IoT, he said.

Stay tuned for the next installment of the IOT blog series!

View all posts by Madhavi Rao

Madhavi Rao is Marketing Director for Cadence India. In this role she leads a team that looks after events, PR, internal communications and social media activities. She has been with Cadence for almost 12 years and also serves as the Cadence Bangalore site leader.