In today’s litigation crazed business world, IP is the shield but deep hardware and software integration is the competitive sword.

What was the technical value of Motorola’s IP? That remains a difficult question to answer. From a purely technical standpoint, one can imagine the daunting task of evaluating the morass of IP collected from both internal development and past acquisitions. While there are groups that attempt such tasks ( see, “Whose IP is Better? Check the Scorecard”), I have found no immediate data that accurately assesses the technical value of the acquired17,000 patents.

Answering the business value of the Motorola IP acquisition might be an easier exercise, thanks to recent end-of-quarter reporting. The company has cautioned that its fourth quarter earners may be disappointing. While the volumes of smartphone sales are up, margin growth is down by nearly 10 percent from last year. Admittedly, this is only a short-time snapshot of the mobile business market. 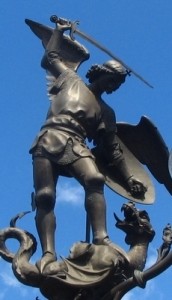 The IP shield works with the integration sword to battle the competition.

Another way to judge the current value of Google’s IP acquisition is in terms of its “shield” effect. Has the company enjoyed greater protection from litigation and IP trolls? The answer there seems mixed. For example, Motorola has launched a lawsuit against Apple accruing the iPhone maker for infringing on six technological patents related to wireless antennae, software, data filtering and messaging.

This new lawsuit follows a favorable ruling earlier this month by the U.S. International Trade Commission (ITC) against Apple’s claim that Motorola had violated Apple patents.  Further, Motorola recently won a preliminary injunction against Apple, which could forbid the sale of iPhones and iPad tablets in Germany.

But these victories are only for skirmishes. The patent war is far from over.

Against the backdrop of these recent litigation successes are the ongoing competitor attacks against Google’s Android IP. One result of these attacks is Microsoft’s increase in royalty agreements with Android licensees.

Taken together, both of these trends – success with Motorola’s handset IP and challenges with the Android OS – have fueled speculation that Google will use the Motorola IP as part of a new mobile hardware platform. While Android-based phones are doing well against Apple’s iPhone, the former remains challenged in the tablet market. Competing against both the iPhone and iPad tablet will require a tighter integration between Google’s hardware and software platforms.

As more and more companies are discovering, deep integration between embedded hardware and software systems is a prerequisite for success in the mobile consumer market. One might even venture to say that integration is the new innovation.

Having an IP shield seems essential in today’s litigation crazed business world. But deep hardware and software integration is the sword that stills cuts through the competition.

One Response to IP Shields but Integration Attacks