Cars, electronics, and the race make for a great day at the Sonoma Indy raceway.

It was an exciting race for the fans, but a challenging one for the drivers. And not without more than one incident: “Controversial penalty, pit-road accident costs Scott Dixon IndyCar win.”

Personally, I was cheering for Tony Kanann’s team (#11) – sponsored by Mouser Electronics, among others. I had met Kanann earlier at one of his Indy 500 victory celebrations shortly after this year’s DAC 2013.

Why am I covering the race? Did you know that one Indy car conservatively costs about $375,000 for a rolling car – to which is added over $100,000 worth of electronics (hardware, software, sensors, and the like)? All of these chips, boards, and networks use design and verification interface IP. Automotive electronics are where chip and embedded electronics meet the road! (Sorry for the lame pun, but I couldn’t resist.) I’ll post an interview with one of the engineers maintaining the car during my next blog. 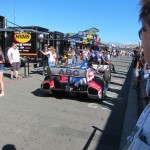 The race cars are pulled from the pit on little trolleys or a handcart powered by muscle. 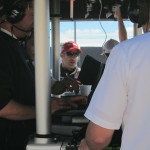 Tony Kanaan, winner of the 2013 Indianapolis 500, talks with the pit-side technical crew before the race at Sonoma last Sunday. 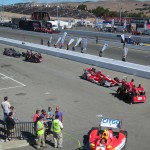 Pre-race pulling of the cars from the garage to the pits. 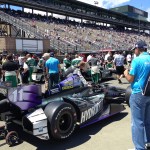 The cars are presented to the fans just before the race. 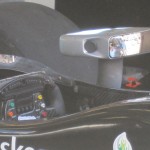 A close-up view of the steering wheel displays and a mirror-mounted camera. 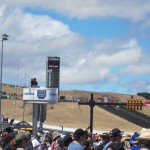 The race is about to begin! 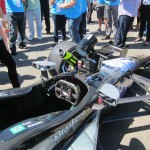 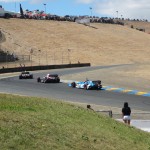 The track climbs up and away shortly after the starting line a the Sonoma Raceway. 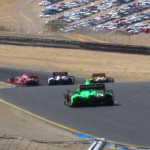 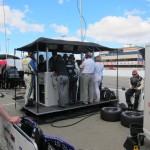 The tech crew monitors the car continuously during a race from a pit-side electronic platform. Data from sensors are received via a telemetry link and analyzed in real-time. 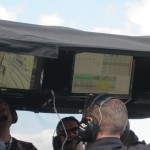 Only a small portion – but certainly the most critical – of all the available sensor data is displayed during a race. 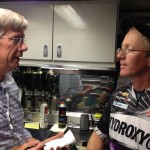 I interviewed on of the engineers that work on Tony Kanann’s car. Look for that interview next time. 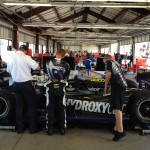 Last minute updates and optimizations are performed on the cars just prior to the race. 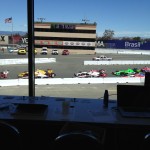 A view of the race form the air-conditioned and relatively quiet press room. Still, it’s hard to beat the sounds and vibrations from the outside stands.