The processor giant seems serious about the handset market as shown by its BOIS collaboration with Phoenix and acquisition of Interdigital 3G patents.

BIOS boot firmware is the first code to run when a PC is powered on. In a drive to modernize the booting process, the UEFI community has created a specification to define the software interface between an operating system and platform firmware. This specification was designed to be both processor- and device driver-independent. UEFI capable systems are already been shipped by major desktop OEMs.

Most PC motherboard suppliers license a BIOS core from third-party vendors like American Megatrends (AMI), Insyde Software, and Phoenix Technologies. The board suppliers then customize the BIOS core to address different hardware needs for their various product lines.

The processor- and driver-independent nature of the UEFI specification complements Phoenix’s latest software tool that provides a universal build environment. This means that a single BIOS can be used across numerous operating systems and silicon platforms, thus improving code efficiency and reliability.

According to Steve Chan, Phoenix’s CTO, the company has engagements with Intel’s desktop PC client group to collaborate on a reference BIOS. Additionally, the company is providing engineering support to Intel’s server group. When asked if the reference BIOS technology would be used on Intel’s embedded products including mobile, Chan could only say that some of the technology could be applied to differenct platforms.

The question concerning cross-platform BIOS development is important as it suggests further evidence that Intel is serious about the handset and tablet markets. Earlier this year, the company announced that the European carrier Orange would support its single-core Atom Z2460 processor powered handset running the Google’s Android operating system. 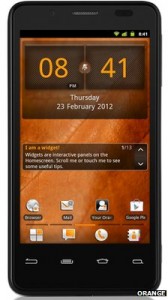 Intel’s Atom-based handset will run on the Orange carrier in Europe.

Additional evidence of Intel’s move into the handset space comes from its recent acquisition of the Interdigital wireless patent portfolio. Interdigitial’s patents cover 3G and newer wireless technology used by both computer and mobile phones.

In collaborating with or acquiring patent-rich companies, Intel is employing a strategy common to handset and tablet manufacturers. By amassing a large number of IP and patents, companies hope to strengthen their negotiating power among rivals. Currently, Apple, Motorola, Google, HTC and Samsung – to name a few – are involved in law suits that began as patent disputes. (see, “IP Patent Wars: Technical Frivolity vs. Substance?”)