Since its inception, PCI Express® (PCIe®) has proliferated quickly to become ubiquitous in the modern digital world. Today, PCIe is an indispensable technology found in high-performance computing, AI/ML accelerators, network adapters, and solid-state storage, to name a few. In addition, recent advances in speed and latency of PCIe have allowed it to gain wider adoption within the memory hierarchy as well (e.g., persistent memory and DRAM via PCIe/CXL slot).

The evolution of new artificial intelligence/machine learning (AI/ML) applications and the accelerating shift of enterprise workload to the cloud continue to fuel explosive data traffic growth at an unprecedented pace. To address the projected data bandwidth requirement for the coming years, PCI-SIG unveiled the PCIe 6.0 specification in 2019, which doubles the transfer rate to 64GT/s! The final PCIe 6.0 specification is expected to be completed and approved by late 2021. 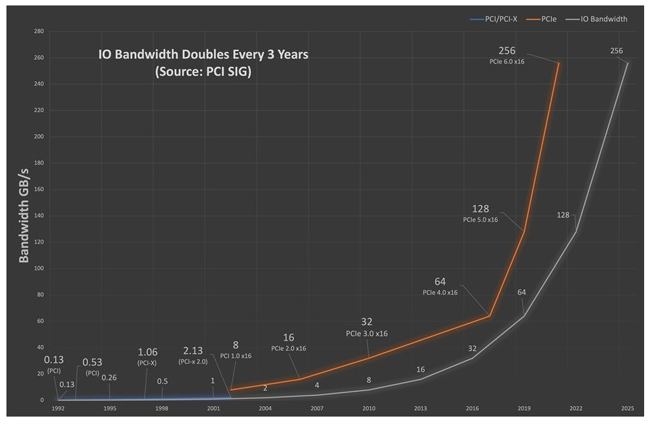 As the industry participates in PCI-SIG Developers Conference this week (May 25-26, 2021), there will be renewed focus on PCIe 6.0. Cadence is introducing its offerings in this space and we are taking this opportunity to dig a little deeper into the nuances of the standard and the implementation. 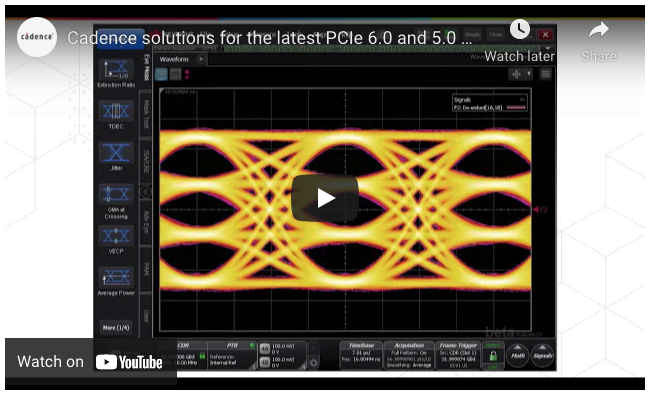 PCIe 6.0 overcomes the channel loss challenge by changing signal modulation scheme from Non-Return-to-Zero (NRZ) to Pulse-Amplitude-Modulation 4-Levels (PAM4). PAM4 is a multi-level signaling technology that transmits 2 bits per unit interval (UI) as opposed to NRZ, which transmit only 1 bit per UI (see Figure 2). PAM4 signaling for PCIe 6.0 is advantageous because by transmitting 2 data bits per UI, data rate is effectively doubled without doubling the Nyquist frequency. Channel loss, therefore, is kept at the same manageable level as PCIe 5.0.

However, upgrading PCIe to use PAM4 signaling brings with it a new set of difficult challenges and complexities that need to be overcome—see our newly published white paper: “Pushing the Envelope with PCIe 6.0: Bringing PAM4 to PCIe”. Fortunately, PAM4 is not new to Cadence. As early as 2015, Cadence invested in developing 112Gb/s PAM4 technologies through the acquisition of Nusemi. Today, Cadence is recognized as a leading provider of 112G/56G PAM4 SerDes IP in multiple advanced FinFET nodes with customers having achieved successful silicon designs with our IP.

The PIPE interface to the controller was updated to version 6.0 with further improvements for latency reduction.

The PCIe 6.0 spec introduces the concept of Flow Control Unit (FLIT) to work efficiently with the required Forward-Error-Correction (FEC) for PAM4, offering lower latency in the most frequently used configurations for the most common payload sizes.

Cadence is leading the way to bring PCIe 6.0 IP solutions to address the forthcoming needs of the rapidly evolving technology landscape at the cutting edge. Leveraging state-of-the-art PAM4 technologies from Cadence’s extensive portfolio of production-proven 112G/56G PAM4 Ethernet PHY IP and its long-standing history in PCIe (Cadence has been a leading supplier of PCIe PHYs and controllers for nearly two decades), Cadence is well-positioned to bring the best-in-class PCIe 6.0 PHY and Controller IP to the market.

View all posts by Tony Chen

Tony is a seasoned semiconductor professional with 20+ years of experience in R&D, Business Development, and Product Marketing. He is currently a Product Marketing Director at Cadence IP group.