The Internet-of-Things has become a catch-all phrase for the latest embedded systems trend, but a precise definition seems tied to the application.

In a recent interview with Junko Yoshida, Chief International Correspondent at UBM Electronics, the CEO of Globalfoundries – Sanjay Jha – stressed that while the Internet of Things was not a mystical animal, it really did need to be defined.

He defined IoT as all devices “used in a sensorial environment, connected and sharing their sensor state with the Internet to optimize computing.” Further, he emphasized that ultra-low power consumption was the first and foremost requirement for semiconductors to make IoT happen.

Yoshida’s article sparked a discussion on the “IoT Embedded Systems” group concerning the need to define IoT in terms of the context of its usage, especially in the semiconductor industry. What follows are the highlights of that discussion, unedited to preserve its the flow. – JB

Richard Wright (Retired Professional Analyst/Engineer): “The Globalfoundries’ CEO also touched upon IoT. Although everyone in the industry today talks about the Internet of Things as if it’s a mystical animal, Jha stressed “it is not. But first, we need to define it.””
This quote alone from the article makes it brilliant.

John Blyler: Richard’s is correct that the first step to addressing any problem is to define it. Still, I think the problem with IoT is just the opposite, namely, that there are too many definitions. Everyone want to cast IoT in a way that benefits them or their business. 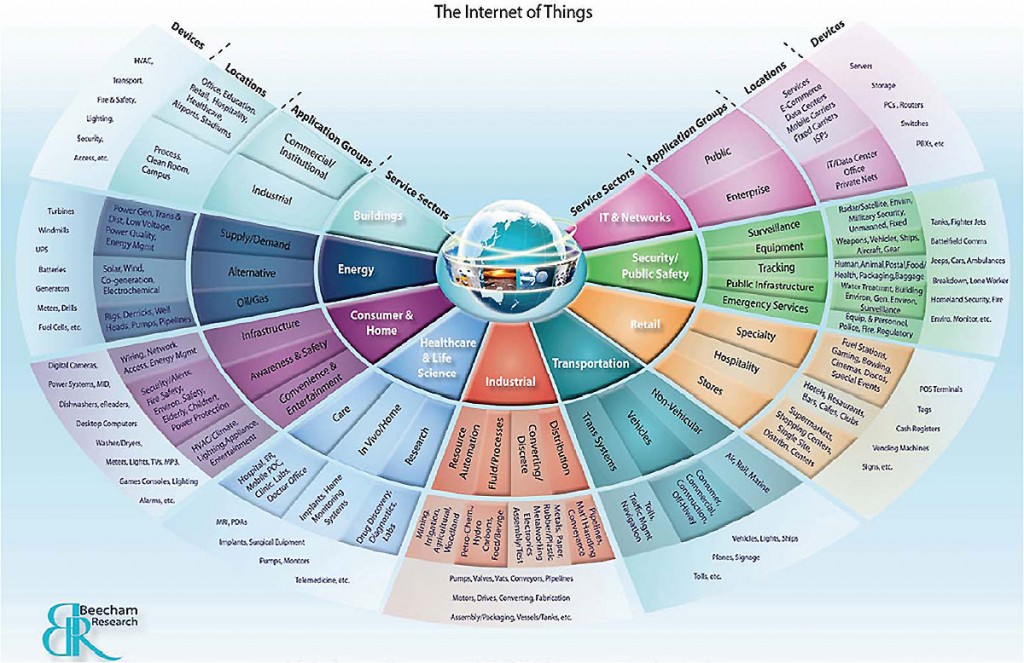 Figure: One of my favorite graphics for capturing the diversity of the IoT. (Courtesy of Beecham Research)

Richard Wright: There should not be a multitude of definitions for a term that refers to using the Internet to connect devices (things) without human intervention. The individual devices/things may have wildly different capabilities but they all adhere to Internet Protocols (IP). The Internet is essentially a stack of carefully defined protocols (standards) that allow any processor to interact with any other processer via Internet Service Providers (ISPs). The ISPs in turn rely on an inter-operative network of independent telecommunication carriers to connect processors using IP. If a device-to-device connection does not use IP standards, but rather PSTN standards (and many do) then by definition it does not fall into the IoT category. The only really confusing point in all this ought to be the fact that PSTNs use the same telecommunication carriers as ISPs.

John Blyler: I agree that IoT is a marketing term that has both a both a precise technical definition and many application specific business definitions. In two years, the phrase will be rebranded into another something else and then I’ll have to change the name of this group. 🙂

Bill Martin (VP at E-System Design) John, I really dislike these acronyms. Ever since the Internet was available (even before it was called Internet), ‘things’ could be tied to a network with an IP address (as noted by Richard) Once tied, data could be transferred between ‘things’. As the network grew, it became more powerful (and also filled with junk). The Internet allows you to tie any “thing” to it that has an IP address. The “thing” must have the computing power to understand when accessed and what types of information or operations to undertake. In many ways, Design-for-Test (DFT) methodology for the IoT is similar.

In DFT, you want to be able to control and observe a device under test (DUT). You can send in commands (specific instructions for entire DUT or for a specific operation) and then you watch (observe) the results of that operation. This might be a parallel or serial stream of data or it could be a simple check sum where all of the summation is performed within the DUT.

The Internet is a larger test platform that contains lots of DUTs that are accessed via their IP addresses….printers, cameras, laptops, phones, watches, TVs, etc). For an Internet test platform, you can send commands requesting data (video streams, water levels, etc) to monitor something important or you can send commands to alter how something is working (turn on/off lights, thermostats, print a file, etc). I believe “IoT and the Internet of Everything (IoE)” were created so that it was easy for analysts and investors could quickly grasp what a company was creating. The categories of products is infinite and due to this is difficult to discuss. It would be better to discuss niche categories (like medical monitoring, home automation, etc) where you can get into more specifics how products in each of these niche markets help consumers (type of control/observability is allowed) and the type of security that is required for each application.

John Blyler: Hi Bill. Things could be tied to the Internet since the beginning. At the start, it was more an Internet of Human Interfaces than an Internet of Things. Still, I do agree in general on the plethora of confusing and “marketing-oriented” terminology. (IOT needs to be defined in each contents of its usage, which is why I like a test-oriented focus to the IoT phenomena. That’s a great angle. But isn’t it just recently that we’ve really been able to interrogate DUTs on the Internet, thanks to more processing power at the sensor? Addressing IoT/IoE in terms of specific markets – indeed, tailoring it to markets – seems logical. Still, there must be come similarities amongst all the market specific implementation, i.e., connectivity.

Bill Martin: On the test and processing power: I think this could have been done probably a decade ago (and there are probably some devices that did…maybe cellphones and WiFi?). But I think 2 items helped accelerate this:

Again, the cell phone is a great example and might be the reason why so many think of remote access. With a phone, users can do searches on internet, watch a movie, take a picture, record voices, and call, text or email to anyone, anytime. All of the capabilities are possible WITHOUT having to be in front of a desktop machine stuck in your office or home.

I think the product marketers are searching for ways to connect their ‘toys’ to the internet for remote access. In many ways, this has been going on for a long time in industrial controls. I remember back in the late 1980s when I interviewed with an old college friend that was going to automate the largest independent oil refinery where everything could be monitored and controlled from a central room. This system had video and a bunch of analog/actuator sensors at critical points in the refinery process. He later went to ADM in Decatur, Il to do the same for all of their food processing. I think the connectivity can be different for various markets.

As a simple example, you would not have a WiFi or 4G or BlueTooth for monitoring a crop (soil moisture, etc). These might be very remote and need to only ‘warn’ when a specific condition happened. So power savings would dictate the type of communication…more than likely a Zigbee type of communication. I really think there might be a short communication vs a long communication standard. The short standard is from the actual device (like a crop monitor) that must communicate to a ‘master’. Then the ‘master’ can tie into a larger network supported by WiFi, 4G or other.

I’m really concerned that the overload of data will drag down or allow too many openings for hacking. The (remote) locale can make it more difficult for remote hackers to gain access. They will only see what is transferred from the ‘master’ and this might be a subset of data and/or controllability that can be done at the local level.

This could either this should be ‘Internet’ or IoS or IoS: ‘Internet of Sensors’ or ‘Internet of Systems’…but this could be really confusing with iOS ( 🙂 ) and is probably trademarked by Apple.

John Blyler: I like the idea of an Internet of Sensors (IoS), but now we’ve just added yet another acronym to the mix. I agree that low power and connectivity are to key defining characteristics of the IoT. The third is distributed intelligence.

BTW: I teach a short course on wireless IoT protocol. One of them is called ANT, which is another ultra-low-power, short-range wireless technology designed for sensor networks and similar applications.