A recent report from DRAMeXchange revealed that the average selling prices (ASPs) for NAND flash memory chips rose $3b to $10b in the second quarter and are projected to continue rising through the third quarter. Why is planar NAND becoming more expensive? (www.dramexchange.com)

A scaling wall in manufacturing of traditional 2D planar flash memory has been reached which limits the number of bits that can be put onto a single chip. With 3D NAND flash, memory suppliers have a workaround that still achieves more bits at less cost or “bit per cost scaling”. Most experts believe that planar NAND relief will come in 2018 with the availability of 64- and 72-layer 3D NAND flash.

Blyler: What are the general trends in NAND Flash? 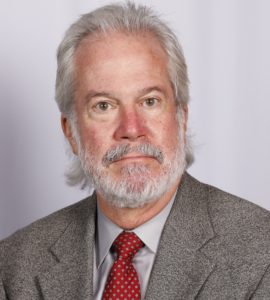 Handy:  Demand for NAND flash recovered in mid-2016 from a downturn driven by a combination of a currency devaluation in China, a low price per barrel for crude oil, and the fact that most OEMs were looking to developing economies (BRIC = Brazil, Russia, India, & China) to drive consumption growth.  The return of growth ran into DRAM constraints driven by low capital spending in 2015 and a difficult transition to 3D NAND, causing a NAND production shortfall.

Blyler: How do you see the state of the industry for planar NAND flash and Solid State Drives (SSDs)?

Handy: NAND flash is in short supply.  This has caused both chip and SSD prices to increase.  Objective Analysis predicts that this situation will last until 3D NAND can be efficiently produced, and we don’t anticipate for that to occur until mid-2018.

Handy: 3D NAND is simply the way that the makers of NAND flash chips attempt to continue to cost-reduce the technology to follow Moore’s law (i.e. 30% average annual price decreases). Over the history of semiconductors costs have been reduced through lithographic scaling. Planar NAND ran into a scaling limit at 15nm – if you shrink it below that point it will simply stop working.  I like Toshiba’s name for their 3D NAND: “BiCS”.  That stands for “Bit Cost Scaling” which means that they will continue to cost-reduce NAND flash even though it can no longer be lithographically shrunk.

Blyler: Who (manufacturers?  Users?  SSD makers? ) is driving the move?

Handy: It’s the producers. They are converting to 3D because that’s the only way they can continue to bring prices down to follow Moore’s Law.

Blyler: When should an engineer move to 3D NAND?  Why shouldn’t they move?

Handy: From the viewpoint of the engineer there is very little difference between planar and 3D NAND.  Clever engineers will design their systems to use either one, thus allowing their purchasing department to pit 3D NAND vendors against planar NAND vendors to attain the lowest cost or best availability.

Blyler: What can we expect from 3D NAND SSDs?

Handy: Hey! That’s four questions in one!  Optane is a new layer in the memory/storage hierarchy.  I have a nice graphic if you want it.  Intel wants it because it will enable the company to ship higher-priced CPUs.  For a long time the company has paid attention to the fact that a slow platform will sandbag a fast processor to the point that the faster processor offers no advantage over a slower one.  This is a way to prevent that from happening.  Today Optane is being delivered in SSD form, but Objective Analysis anticipates limited acceptance until the Optane DIMM ships.  Both are based on 3D XPoint Memory which is 1,000 times as fast as NAND flash (planar or 3D), but the PCIe interface on the Optane SSD limits the performance so much that the Optane SSD is only 7X as fast as a NAND flash SSD.  The Optane DIMM (not yet available) will pass most of the 1,000X speed advantage through, providing a couple of orders of magnitude more “Bang for the Buck”.  To your second question, an SSD can be made of any kind of memory chip, and some companies have even shipped DRAM-based SSDs.  Optane SSDs are simply those built using Intel’s & partner Micron’s new 3D XPoint Memory technology. 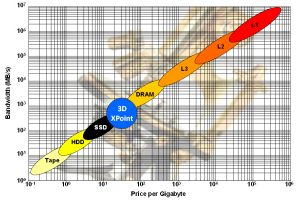 It’s on a log-log format because a linear format would make the L1 orb consume the entire chart, and all the other orbs would be squished into the bottom left corner in such a way that you couldn’t even see them.

The three upper-right orbs: L1, L2, and L3, are the processor caches.  L1 and L2 are on the processor chip.  L3 (if it is used at all) is usually implemented by SRAMs off of the CPU chip.