Chip Signal
Industry Blogs
get the latest news and advice for everything IP
World’s Most Trusted IP Resource
Home  >  Blogs  >  Nanix and Transmeta? Ghosts from Wearables Past

Nanix and Transmeta? Ghosts from Wearables Past

The charmed life(cycle) of wearable technology will expand the market for both hardware and software IP.

The market for wearable devices – a big part of the Internet of Things (IoT) movement – will be huge, anywhere from hundreds of millions to billions of device by 2018. What makes this market so large?

The analysts at IHS define wearable tech as being both wearable and smart (wireless connectivity and independent processing capability). Wearables is a growth industry in part because it will drive other industries, such as batteries ($70million) and sensor hubs (1.3Billion shipments) over the next four years. And that doesn’t including the lighting and display part of many but not all wearable devices.

When most consumers think about wearables, then envision smart glasses from Google or smart watches from Samsung or (in the very near future). But wearables span a vast market as captured in this infographic from Beecham Research. 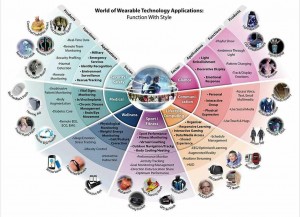 The fashion world has a renewed interest in wearable technology. For a surprisingly broad range of fashion applications, check out Dassault Systemes FashionLab.  It’s their technology incubator dedicated to fashion designers (including wearables) using their model-based tools. 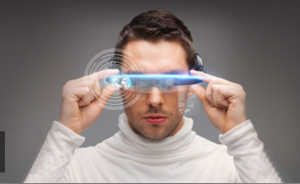 Fashion wearable examples includes tiny, low power lights cleverly combined I clothing and hair to things like the Rufus Cuff wrist communicator, which pairs with both iPhone and Android smartphones for voice and video calls, fitness tracking and the like. 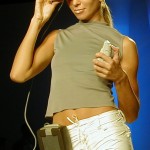 But let’s set the way-back machine to 2001 at the CTIA show in Las Vegas. At this major event there was a wearable fashion runway hosted an MIT Media Lab spin-off called Charmed Technology. I interviewed one of co-founders of Charmed, Katrina Barillova, herself a former model, about the technology behind the hype. Of particular interest to me was the use of NANIX as an open source, Linux derivative, standard for the software development of a variety of the wearable, wireless products. This tailored operating system, combined with the Transmeta Corp.’s Crusoe processor, make for some sexy engineering.

If you look up pictures of wearable technology from 2001, you’ll see fully functioning computers strapped to the waist. These “mobile” computer systems look monstrously large by today’s standards.

And that was only 14 years ago! The enormous size reduction and performance increase is a testament to semiconductor design and manufacturing industry.