Nielsen’s Law of broadband connectivity lags the Moore’s Law of computer processing for some rather surprising reasons.

While researching for an article on gigabit broadband technology, I came across a reference for Nielsen’s Law (see Figure 1) in a whitepaper for the Fiber-to-the-Home Council, Europe. Jakob Nielsen theorized that the Internet bandwidth doubles every 12 months. 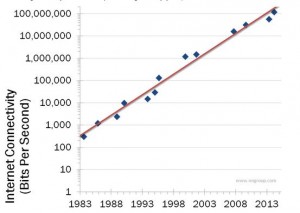 The reason for the slow growth of Internet bandwidth has more to do with business realities than technological limitations. Nielsen lists three reasons why average bandwidth for the majority of Internet users increases slower than computer processing performance:

Nielsen’s Law has been updated sporadically since its start date in 1983. For 2014, the law predicted an upgrade in broadband speed for mainstream higher-end users to 120 Mbps.

Are any mainstream users operating at these speeds? Not according to Akamai’s “State of the Internet” report (see Figure 2), which listed the third-quarter 2014 peak speed in the US at 48 Mbps. The average connection speed was far less. As a point of reference, my home office speed was tested at 25 Mbps. Why is there a discrepancy between Nielsen’s Law and the broadband Internet speeds experienced by most of us?

Figure 2: Here’s a test of my office broadband connection from Speedtest.

Like Moore’s Law, Nielsen’s Law is a measure of leading edge capabilities. In reference to Moore’s Law, there is acknowledgement of a design gap that exists since we can not immediately use all of the available transistors provided on each leading process node. By analogy, Nielsen’s Law addresses the fastest speeds available for high-end Internet users. It will be many years before the majority of users experience 100 Mbps speeds – for the reasons noted earlier.

What does this mean for the future? If or when Moore’s Law hits the wall in about 10 years – as many now predict, what will be the impact to Nielsen’s Law? Will it continue on as it already lags Moore’s Law by roughly 10%? I don’t know.

But the push toward higher and higher broadband speeds – even gigabit speeds – means that a lot of new semiconductor intellectual property (IP) will be needed. That’s good news for consumers and developers alike.