Chip Signal
Industry Blogs
get the latest news and advice for everything IP
World’s Most Trusted IP Resource
Home  >  Blogs  >  Past, Present and Future Ghosts of EDA-IP for 2017

Past, Present and Future Ghosts of EDA-IP for 2017

EDA tool and IP predictions from six years ago are revisited  and corrections  revealed. 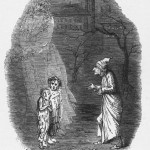 Courtesy of the Charles Dickens Museum

The future is hard to predict. Six years ago I tried to predict the future of semiconductor EDA tools and intellectual property (IP) by visiting its past, much as in the famous Dicken’s ghostly Christmas story. (Later to serve as a regular exercise for M.R.James.)  It’s time to revisit my now ghost of a prediction to see what the ever-changing future holds today.

Let’s travel back in time to December 2011. Synopsys had recently acquired Magma thus strengthening it IP verification portfolio. But IP wasn’t really a big concern in 2011. In fact, Gary Smith’s traditional DAC kickoff presentation in June of that year mentioned IP only in passing. Back then, the bigger issue was the cost of EDA tools. As Smith noted, “EDA is responsible for developing the design tools that enable the IC design process, at a design cost that allows the ecosystem to operate at a profit.”

Setting aside the world of processors, the main role of semiconductor IP in 2011 was in the memory and interface devices. Cadence has just acquired Denali, an IP memory company, the year before. IP for USB interfaces was a hot item but restricted the profitability of such IP to a narrow window, affected by the constant re-design and re-validation activities needed to stay current with the latest standards.

The biggest business news for the EDA and IP communities back in 2011 was the insistence by Carl Icahn that Mentor Graphics should be sold-off to another EDA company. Icahn had been acquiring more and most stocks in Mentor over the prior years. The proposed sale of one of the big three EDA companies was big news at the time (see, “Icahn Seeks Mentor’s Acquisition or Sell-off“).

Perhaps Icahn had fallen prey to the popular rumors of the time that a major fab (like TSMC) or large CAD company (like Dassault Systemes) would buy an EDA tools company. (see, “Are EDA and Semiconductor Markets Cycling Back or Spiraling into the Future?”). As I speculated at the time, Mentor’s presence in the embedded and PCB space would likely stir more interest than their EDA tools (sans Calibre, which had been announced the previous year (2010)).

Now let’s journey with the ghost of December’s present back to 2017. IP has now become THE crucial sales driver in the otherwise flat EDA tools market. Further growth for EDA tools will be found in adjacent markets, as  Laurie Balch, Chief Analyst at GSEDA, reported at DAC of this year (see “Age of the System Comes to EDA”).

IP has become so important as to warrant its own show in Silicon Valley. This year marks the second year of Warren Savage’s REUSE event, dedicated to smaller and midsize IP companies without the dominance of the larger EDA players.

Thanks to careful maneuvering by Wally Rhines and his team at Mentor Graphics, Carl Ichan faded into the background. Instead, a new suitor with perhaps more vision acquired the Oregon-based company. Siemens acquisition of Mentor Graphics was finalized in March of this year. Much has already been written about the (mostly) pros and cons of this acquisition (see “SoS Meets SoC as Siemens Buys Mentor Graphics”). From my perspective, it seems that Siemens is as interested in Mentor’s CAD design-manufacturing, embedded, automotive cabling and electronics and systems modeling/context technology as in its IC design offerings.

The last few years have seen enormous consolidation of companies in the electronics (Freescale-NXP-Qualcomm), semiconductor capital equipment, EDA tools vendor and even IP (e.g. IPextreme acquisition by Silvaco) markets. During this time, IP has taken on new importance as a way to deal with complexity and cost. O, and something called the Internet-of-Things has help in the overall reuse of hardware and software IP.

Dare I make a prediction for what lies ahead, to see what the ghost of future December’s might reveal? I think Siemens and Mentor will take off in new and interesting directions, leaving most of the traditional EDA tools growth to Synopsys and Cadence. But even these last two market giants has gazed into the future and seen the need for more IP, software and perhaps systems acquisitions.

It’s hard to imagine the EDA space shrinking any further but it might happen. I expect FPGA vendor Xilinx will soon be acquired and Lattice will eventually be owned by a Chinese concern. Speaking of global markets, the theft of IP and security of all things will be major concerns for the many years to come. This might have the positive affect of increasing R&D within the US. But that positive note will be diminished by cuts to education and Visa’s that would normally allow the best and brightest of the world to study and work in the US.

For now, it appears that “reuse” will be the guiding theme for the future – reuse of EDA technologies and methodologies applied to mechanical CAD and embedded software systems. The verticals fields of automotive, avionic, industrial electrification, medical and others will benefit from such reuse. The development, management and securing of all kinds of IP will determine the success of these reuse efforts.

In keeping with the past, I’ll plan to revisit these predictions in six years hence – 2023. Or perhaps by then I’ll be replaced with an artificial intelligence (AI) engine to become the ghost in the shell that is visited by the musings of a silicon machine. But to such a future possibility I say, “Bah, Humbug!”

This entry was posted in General and tagged acquisitions, Christmas past, EDA tools, IP, predictions. Bookmark the permalink.