Put a Smile in Your Semiconductor IP

Most humans can tell with the glance of an eye whether a smile is real or fake. Robots take a bit longer. Can IP designers shorten that gap?

The news is full of stories about robots becoming more human like in shape or human like in their awareness of emotions. But have you ever seen the algorithmic design that is required for a computer to make sense of a human smile?

MIT has developed a computerized system that purportedly can tell the difference between smiles of joy and smiles of frustration. The ultimate goal of the research of the university’s Affective Computing Group is to make a computer that’s more intelligent and respectful. 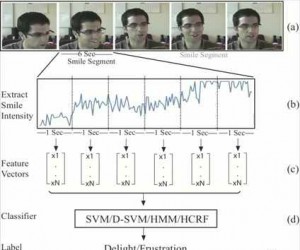 Figure: Smile – You’re on a computer’s camera. Here’s the algorithm for a smile.

What does this mean to semiconductor IP designers? As I’ve mentioned in the past, today’s robots use semiconductor chip-level and software intellectual property (IP). It is true that a great deal of the IP centers around microntroller (e.g., 8051 to ARM Cortex) technology. But there are equal shares of IP for analog sensors and I/O interfaces; RF front-end subsystems for wireless applications; as well as analog-mixed signal and DSP cores. Further, let’s not forget the growing market for low-power specific IP variations.

The challenge for System-on-Chip (SoC) designers remains the same; do it faster, with lower power and at less cost. For smiles, the immediate challenge for algorithmic IP developers is to make robots know at a glance (or shorter camera sequence) if a human is really happy or not.

This entry was posted in General and tagged algorithms, Intel, MIT, robot, smile. Bookmark the permalink.