Imagine pulling energy out of thin air and from significant distances from the source. This is one of the energy-harvesting technologies that is being studied by Imec.

Radio-frequency (RF) energy harvesters are different from typical induction charging systems, such as the popular “power mats” and electric toothbrushes that require a nearby power source. There, the close proximity of the power sources is needed to ensure an efficient transfer of power—usually within millimeters.

In contrast, RF energy harvesters work over a much larger distance—from about 10 to 15 meters—and at much higher frequencies. (Typically, they are in the GSM mobile-radio band.) The key to successful RF power transfer lies in the design of the antenna system, according to Jan Van der Kam, program director for the Sensors and Energy Harvester Group at Imec.

“We are looking at antennas that direct the RF energy much more efficiently instead of spreading it in all directions,” Kam said at the recent Imec Technology Forum (ITR) held in Leuven, Belgium. Imec is working on designing more efficient antennas, but also developing the feedback mechanism for the energy receptors. This feedback approach will help to increase the efficiency of the energy transfer to even greater distances.

Application areas for this technology would include everything from smart buildings (where the energy could be generated locally and transferred without wires) to recharging a hearing-aid battery. As a proof of concept, Imec acquired a small weather station that was successfully powered at a distance using RF energy harvesters. 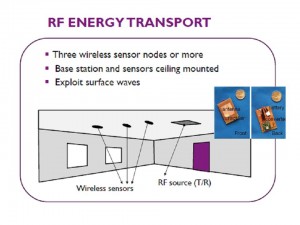 RF energy harvester board used to charge a battery.

Energy harvesting, or scavenging, has become a lucrative topic of late and a source of new intellectual-property (IP) patents. When combined with the added functionality and performance requirements of today’s mobile devices, the slow improvement in battery technology (estimated at about 3% to 5% per year) has created needs for the following: architectural changes to improve system-on-a-chip (SoC) efficiency and new ways to generate energy. The architectural changes can be difficult and expensive to implement. While voltage islands and dark silicon are well discussed, companies are just beginning to work with more exotic approaches like near-threshold computing. Being able to generate energy could postpone the need to move to those techniques while saving costs.

Most approaches focus on movement or light to generate that energy. But pulling energy out of thin air isn’t a new concept. At the turn of the 20th century, Nikola Tesla proposed using wireless power and even set up a laboratory in Wardenclyffe, N.Y., to turn that idea into reality. More than a century later, his idea appears to have some merit.