Why is one of Europe’s leading semiconductor IDMs pushing into leading-edge, 28-nm FD-SOI technology while leaving a market where such technology might be useful?

It was a chance meeting that made me wonder about two recent announcements from one of the world’s largest semiconductor companies.

Last week, I attended an IEDM briefing in which STMicroelectronics presented silicon-verified data to further confirm the manufacturability of its 28-nm Fully Depleted Silicon-on-Insulator (FD-SOI) technology (see “FinFETs or FD-SOI?“). Ed Sperling, Editor-in-Chief for SemiMD, summed it up this way:

“What’s particularly attractive about FD-SOI is that it can be implemented at the 28-nm node for a boost in performance and a reduction in power. The mainstream process node right now is 40 nm. And while Intel introduced its version of a finFET transistor called Tri-Gate at 22 nm, TSMC and GlobalFoundries plan to introduce it at the next node—whether that’s 16 nm or 14 nm. That leaves companies facing a big decision about whether to move all the way to 16/14 nm to reap the lower leakage of finFETs, whether to move to 20 nm on bulk, or whether to stay longer at 28 nm with FD-SOI.” 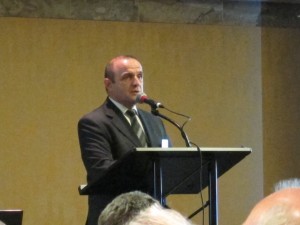 I didn’t realize until later that week, but – on the same day as its 28-nm FD-SOI technology announcement – STMicroelectronics stated that it would curtail its presence in the mobile-handset space via the Ericsson partnership. As Chris Ciufo noted in his “All Things Embedded” blog, Ericsson will remain in only two market domains: Sense and Power and Automotive as well as Embedded Processing. “For the former, device categories include MEMS, sensors, power discretes, advanced analog, automotive powertrain, automotive safety (such as Advanced Driver Assistance Systems [ADASs]), automotive body, and the red-hot In-Vehicle Infotainment (IVI) category,” wrote Ciufo.

In the embedded processing market, the company will “focus on the core of the electronics systems” and ditch wireless broadband. Target areas include microcontrollers, imaging, digital consumer, application processors, and digital ASICs.

Considered together, these two announcements beg the following question: If STMicroelectronics is only interested in the sensor, automotive, and “embedded” markets, why does the company need to work at leading-edge process nodes – like 28 nm on FD-SOI? This question arose during a recent chance meeting with Juergen Jaeger, Sr. Product Manager at Cadence Design Systems.

Jaeger suggested a possible answer by noting that Moore’s Law generally provides a cost savings with power and performance benefits at lower processing nodes. “This makes sense for both automotive infotainment and networking technologies,” explained Juergen. “But it doesn’t make too much sense for gearbox, engine, anti-lock brakes, or steering systems, since they need high reliability and tolerance.” Those requirements tend to restrict devices to fully tested, high-node geometries.

Jaeger reminded me that infotainment systems-on-a-chip (SoCs) are very complex devices requiring integrated network and wireless systems – in addition to an array of audio/video codecs that must drive multiple LCD screens within today’s cars.

Additionally, STMicroelectronics’ move to FD-SOI is one way to mitigate the risk facing leading-edge bulk CMOS processes. As Sperling observed, “At 28 nm and beyond, however, bulk has run out of steam, which is why Intel has opted for finFETs.” Meanwhile, FD-SOI offers power and performance benefits while staying on today’s planar-transistor manufacturing processes.

In the end, the push toward FD-SOI technology at exiting 28-nm nodes may play well into a number of low-power and high-performance chip markets. This is not a path without risk. But it does highlight the accelerating convergence of SOI and bulk CMOS at leading-edge nodes. And it should strengthen STMicroelectronics’ strong position in the automotive infotainment space.