USB4 can simultaneously tunnel USB3, PCIe and DisplayPort native protocol traffic through a hierarchy of USB4 routers. The key to tunneling of these protocols is routing table programmed at each ingress adapter. An entry of a routing table maps an incoming HopID, called Input/Ingress HopID to a corresponding pair of Output/Egress Adapter and Egress/Output HopID.

The responsibility of programming routing tables lies with the Connection Manager. Connection Manager, having the complete view of the hierarchy of the routers, programs the routing tables at all relevant adapter ports. Accordingly, the USB3, PCIe and DisplayPort protocol tunneled packets are routed, and reach their respective intended destinations.

The diagrammatic representation below is an example of tunneling of USB3 protocol traffic from USB4 Host Router to USB4 Peripheral Device Router through a USB4 Hub Router. The path from USB3 Host to USB3 Device is depicted by routing tables indicated at A -> B -> C -> D, and the one from USB3 Device to USB3 Host by routing tables indicated at E -> F -> G -> H . Note that the Input HopID from and Output HopID to all three protocol adapters for USB3, PCIe and DisplayPort Aux traffic, are fixed as 8, and for DisplayPort Main Link traffic are fixed as 9. 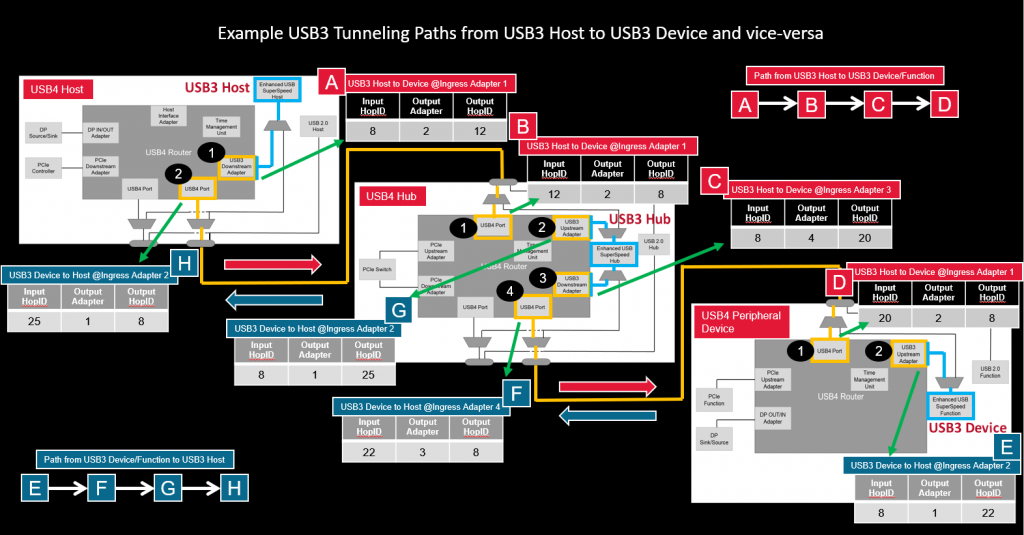 The figure below shows an example of tunneling of all the three USB3, PCIe and DisplayPort protocol traffic together. The transport layer tunneled packets of each of these native protocols are transported simultaneously through the routers hierarchy. 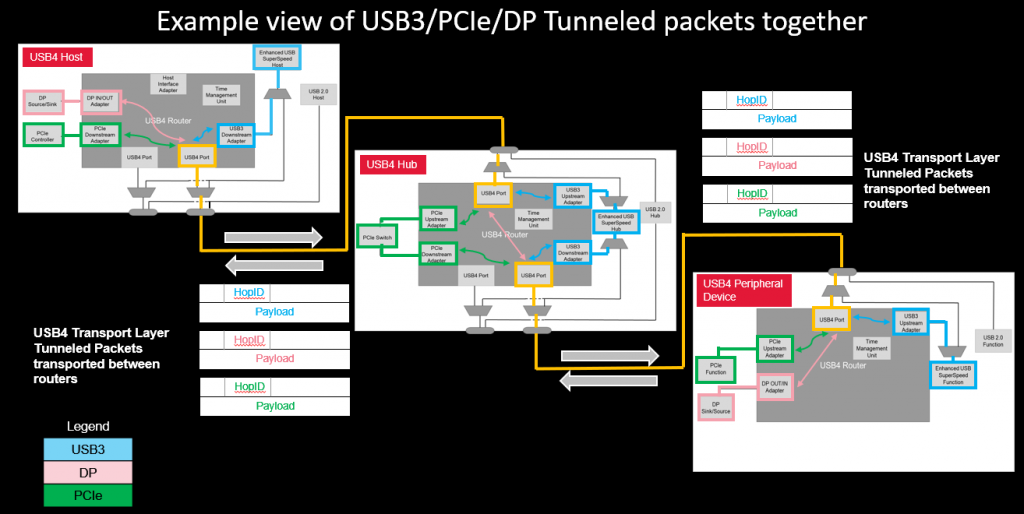 View all posts by Neelabh Singh

Neelabh Singh is the Product Engineering Architect in the Verification IP (VIP) group at Cadence Design Systems. He has been associated with the VIP domain for 20 years on different protocols. In the recent years his focus has been on USB4 and its various verification aspects.