The most awaited news of the year is officially here! USB Promoter Group has officially announced USB4 specification, which is an extensive upgrade over USB 3.2 specification. The new specification guarantees double the speed of USB 3.2 Gen 2×2, and has built in Thunderbolt™ 3 compatibility. The official specification release is expected by mid-2019.

The new specification will use the existing USB Type-C™ connector and cable assembly, accentuating USB-IF’s push towards a rapidly evolving USB Type-C ecosystem. USB4 will use USB Type-C’s Dual Differential Pin assembly to generate dual lane data at the new data rates, however it will be possible with the compliant cables only.

“The primary goal of USB is to deliver the best user experience combining data, display and power delivery over a user-friendly and robust cable and connector solution,” said Brad Saunders, USB Promoter Group Chairman, in a press statement.

This statement, together with the adoption of Thunderbolt, clearly hints that USB4 comes with the capability of running numerous display devices along with conventional USB traffic, where a USB controller can manage and share the available bandwidth using optimization algorithms.

Significant details from the USB4 announcement:

There would be considerable upgrades in USB Type-C and USB Power Delivery specifications also, considering the expected changes in Power Ratings, Capabilities, and other Vendor specific parameters. Final branding, marketing logos and other technical details are expected in the coming months. 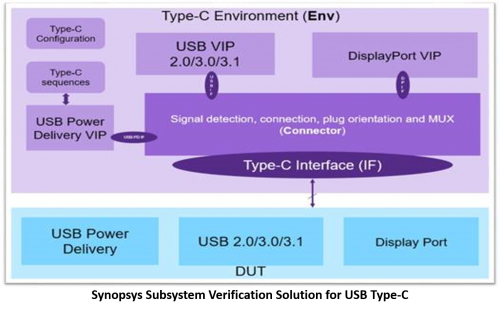 The complete USB verification solution from Synopsys also includes VIP and source code Test Suite for USB 3.1/3.0/2.0 and Power Delivery 2.0. Synopsys is working closely with the early adopters of USB4, and contributing significantly to the evolution of the USB ecosystem. For more information, please visit http://synopsys.com/vip.

View all posts by Prishkrit Abrol

Prishkrit Abrol is an R&D Engineer at Synopsys, Inc. responsible for creating Verification IPs. Prishkrit has played an important role in the development and deployment of Verification IPs such as USB and USB Power Delivery. He is also an avid blogger and has written various blogs on USB products.