All the workings of USB4 protocol are primarily about how to transfer the native protocol data through tunneling from their originating points to respective destinations. One may verify thoroughly the core layers, like logical layer and transport layer, of a USB4 design. But that is only half the job done.

The next challenge comes up at verifying the tunneling of each native protocol, which are USB3, PCIe, and DisplayPort. Each comes with its own unique verification challenges.

On one hand in DisplayPort time criticality of main link data tunneling is paramount, on the other in PCIe and USB3 the play with the credits to ensure no data drops happen. Of course, there are many other respective protocol aspects that need to be taken care of.

Verifying all the three protocols tunneling together, in a router design can be considered no less than verifying a sub-system, with all the various verification scenarios it throws up in each native protocol domain and executed on top of USB4.

Shown below are a representative and simplified depiction of a typical USB4 verification setup, 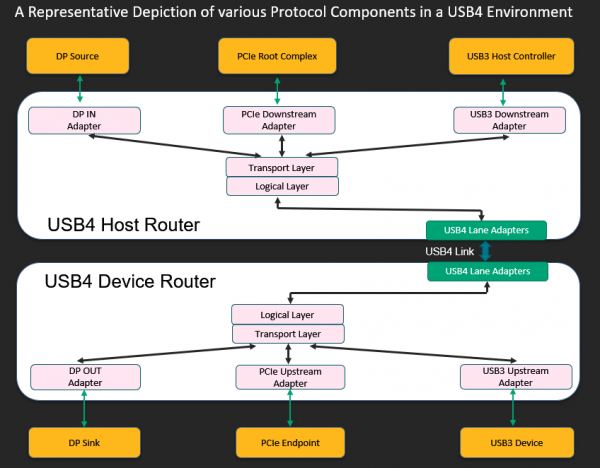 The very first step in starting with the verification of protocols tunneling is identifying and getting the right protocol components, and their respective configurations correct. On top of that, the various test bench connections of these components to each other need to be done accurately. Putting such a test bench together could be a significant effort for a verification team.

It could be of great help to verification engineers if they can get a ready reference of such a multiprotocol environment setup saving them some time and effort in the process.

Cadence USB4 VIP in the VIP catalog release includes a user multiprotocol environment setup which may be taken as a reference to kick-start the verification environment setup. It has all the various protocol VIPs connected and configured, ready to perform the protocols tunneling over USB4.

View all posts by Neelabh Singh

Neelabh Singh is the Product Engineering Architect in the Verification IP (VIP) group at Cadence Design Systems. He has been associated with the VIP domain for 20 years on different protocols. In the recent years his focus has been on USB4 and its various verification aspects.