“Even if he gives the same presentation two weeks apart, it will be different.” —Neil Robinson, fellow attendee, on Chris Rowen

My question: Is it because he is such a dynamic speaker, and inserts all sorts of info on the fly, or is it because the industry is changing week to week? The answer: Both. 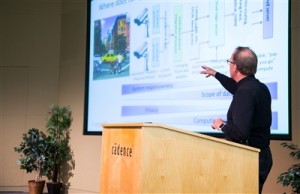 I attended a Distinguished Speaker event at Cadence yesterday, featuring Chris Rowen, CEO of Cognite Ventures, and formerly of Cadence. He was speaking about “Vision, Innovation, and the Deep Learning Explosion”. As ever, Chris is truly a great speaker and evangelist when it comes to machinelearningdeeplearning and the business and application implications it will have on the current and future technology markets. I have heard him speak multiple times before, and have always enjoyed his presentations.

Today’s presentation was no different. While others may have walked away with other details, the two main themes for me were: 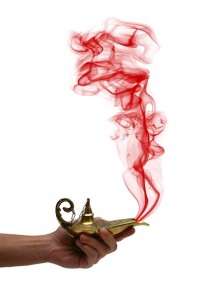 Where Does the Magic Happen?

In the story of Aladdin’s lamp, is the magic in the lamp, or in the genie inside it?

In his presentation, Chris showed a cost/benefits comparison of in-device processing through various iterations of cloud computing, to the full cloud solution. The ultimate realities can be broken into four parameters to consider: 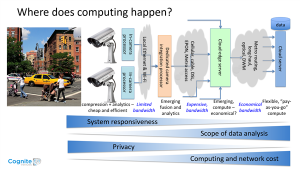 An example of a system in which you really want to use an embedded system is Auto2, especially in advanced driver-assistance systems (ADAS), especially especially in object detection and safety subsystems. As Chris said, the last thing you want to see when facing a busy intersection with pedestrians, cars, bicycles, traffic signals and signs, and a snowstorm going on is the word “buffering” on your Auto2 interface.

Images are being processed faster than 24 frames per second (fps), which is the standard for movies, 60fps for video games. The human eye can see about 1000fps, so we have to assume that object detection has to probably go that fast. Imagine a 360° view around your car, with that many fps… how many pixels is that? Is it enough to detect that bicyclist? Best add a few more.

So the best way to approach the processing required for an automotive system is to have the magic happen at the local level—in the lamp—with the critical, time-sensitive systems being processed in literal real time. To do this, lightning-fast DSPs that use extremely low power embedded in the system are required.

How do we avoid carrying a datacenter in the trunk of our Tesla? Well, this is the reason for the big push for effective DSPs in these applications. You must have an economic use of MACs*/watt. Google’s TPU** uses a very different architecture, but gets good results, though it uses a lot of power. 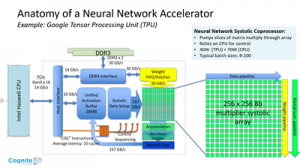 The Tensilica C5 Vision DSP allows about 1TMAC/watt, so that’s a good start. 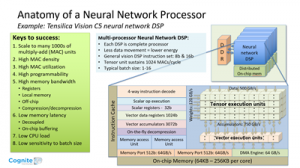 As Chris said, we’re in the beginning of a silicon design renaissance. Standard processors are improving with new IP building blocks, from an era of chip startups with successes that are few and far between.

Stay tuned for more information about this interesting talk!

* MACs are “multiply-accumulates”, a way of measuring computations.

View all posts by Meera Collier

For most of Meera's career, she has been a tech writer, producing content for a half-dozen different industries, including EDA. Starting her career in manufacturing, she wrote maintenance manuals for wafer manufacturing equipment; later, for high-precision lasers. From there, Meera spent three years at Altera in the mid-00s, writing and editing software user's guides. Along with every other tech writer in the valley in late 2008, she then took a break from high-tech, returning to Silicon Valley in 2012, this time re-focused to write about mobile and networking software. Three years of this, followed by a couple of years of contracting (most notably at HPE’s Data Security group), she is back here in the EDA biz, trying like heck to remember everything she forgot since 2008, and researching like mad to catch up again.