System Realization And the X-51A Failure

What does the crash of NASA’s latest “X” series of experimental aircraft have to do with semiconductor intellectual property (IP)? Some would call the crash a failure related to a lack of system realization, a concept that expands semiconductor silicon design beyond mere chip design and the electronic engineering discipline. 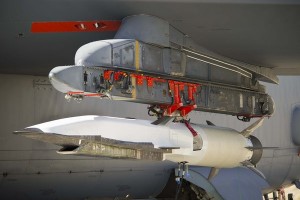 The X-51A WaveRider mounted under the wing of a B-52 at Edwards Air Force Base. (U.S. Air Force)

Outside of the niche world of semiconductor design, “systems realization” is called “systems engineering (SE).” Often, the integration phase of the systems engineering process is where subsystem failures like faulty control fins should be caught but might go undetected. How will semiconductor vendors interact with others in the system/product supply chain to ensure all subsystems work as intended? In this case, semiconductor vendors might supply both the electronics and the electromechanical motor controls for a system similar in design to the X-51A.

A quick check on Chipestimate.com under “control motors” reveals several vendors who provide electromechanical IP. None of these vendors are responsible for the failure of the A-51A. My point is that, as semiconductor design embraces the larger system (“system realization”), integration problems across engineering disciplines and product design will likely become more numerous. Granted, controlling the tail fins on an unmanned aircraft traveling at Mach 6 require a more ruggedized and robust electromechanical motor systems than is typically used for semiconductor applications – where small, lightweight and low power are the driving factors. Still, the basic design and algorithms are the same.

Control fin failures are unfortunate but hardly uncommon, as I remember from my earliest days as a young engineer. After college, I worked designing hardware and software data acquisition and instrumentation systems for prototype flight and lab systems. I spend many years at several Department of Defense (DOD) research and development facilities – first at China Lake (in the desert) then at Point Mugu (on the coast). Together, these two ranges form part of the largest flight test areas in the US. The X51A’s control fin failure occurred shortly after launch from above the Point Mugu Naval Air Test Range.

Here’s another career-related coincidence for me with this story: The X-51A hypersonic scramjet engine was designed by Pratt-Whitney Rocketdyne. I worked at Rocketdyne when it was still an independently owed company situation in a prime location in Canoga Park, CA. Back then, southern California was a mecca for aerospace and defense professionals. Now, much of the original Rocketdyne facility is a shopping mall.

Learning the details about the crash would be instructive, but that information is unlikely to be shared with the general public. For now, the lesson for the engineering community seems to be the familiar reminder of the importance of rigorous systems engineering and integration. (For more on system-level failures that cross engineering disciplines, see Charles Perrow’s book, “Normal Accidents.”)

Was anyone as awestruck as I with this week’s successful flight of SpaceShipOne (SS1)?  History has again repeated itself over the Mojave Desert as brave men toiled to send a rocket plane into the fringes of space. In an aircraft that looked remarkably like the Bell X1 – the first rocket plane to break the sound barrier back in 1947 – today’s SS1 reached a record-breaking altitude 328,491 feet (roughly 62 miles). This achievement made test pilot Mike Melvill the first civilian to fly a spaceship out of the atmosphere.

Some of you might remember that NASA’s X-15 rocket planes achieved the same goal back in the 1960s. Unfortunately, this promising type of space flight lost out to the suborbital rocket approach used by the Mercury project.  For those who have forgotten this early history of spaceflight, I recommend Tom Wolfe’s classic book, “The Right Stuff.”

Over the years since the X-15 flights, NASA has continued to explore ways to efficiently fly near the edges of Earth’s atmosphere with projects like the X-30 National Aerospace Plane (NASP). Sadly, this project was cancelled in the early 1990’s due to budgetary cuts and technical obstacles, e.g., scramjet engines (really cool technology but darn tough to build).

Which brings me to my concluding thoughts about the success of SpaceShipOne. Here was a privately funded project that built on the past success of government backed research and development activities. This same process has also created most of the commercially funded wireless technologies that we enjoy today, (see WSD magazine, Sep 2002 – “Wireless Roots Pay Off For Defense Technology.” For convenience, this article has been posted under the WSD Update e-Newsletter archive – see below.) This process demonstrates the way in which difficult and risky innovations can be turned into economically profitable products for the general public. Governments assume the risks of investigating new technologies, after which private funds can be used to refine these technologies into actual products and services. This is a tried and true model for technology transfer that leads to economic growth – jobs, in layman terms. (For a good overview of this process, see Banscomb’s and Auerswald’s book, “Taking Technical Risks,” – reviewed in the March 2004 issue of WSD magazine.)

But this critical model only works if the government is willing to spend money on R&D projects. Unfortunately, recent studies from the National Science Foundation indicate that U.S. R&D budgets have increased by only 1 percent between 2002 and 2003 after accounting for inflation. Further, since 2000, there has been little change in total U.S. R&D in real terms (constant or inflation-adjusted dollars).

History has shown that technological advances lead to economic growth. But R&D drives major technology innovation. Can the US maintain it’s technological edge without continued investment in basic R&D?