This “week in review” covers Moore’s Law in reverse, Cadence’s interest in interface IP, a game GPU video, wafers’ decline, and the dangers of armchair publishing.

I have several varied bits of news that might enrich your view of our semiconductor world:

* Moore’s Law Predicts Life Originated Billions of Years before Earth – Check out this way-cool thought experiment in which Moore’s Law is projected backwards to predict the theoretic chronological origins of life on Earth. For completeness, perhaps the projection should have been down with Wright’s Law (“Wright’s Law Edges Out Moore’s Law in Predicting Technology Development”).

* Cadence Challenges Synopsys on Interface IP – I’m sure you’ve read this announcement. Cadence is pushing into the interface IP market, offering a direct challenge to the dominant player – Synopsys. I won’t dwell on the business implications of this push, but rather note that it gives further weight to the growing importance of subsystem IP.

* Sean O’kane and I enjoyed a quick video chat with David Harold from Imagination Technologies at the Game Developers’ Conference. Among other things, Harold demonstrated his company’s GPU, which brings PC-quality gaming graphics to a tablet. 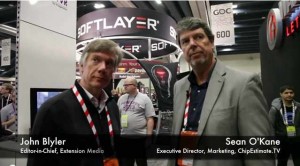 * DAC Commercial 2013 – DAC is just around the corner and at a new location – beautiful Austin, TX.

* Slight Decrease in 1Q2013 Silicon Wafer Shipments – The worldwide silicon wafer area shipments decreased during first quarter 2013 when compared to fourth quarter 2012 area shipments, according to the SEMI Silicon Manufacturers Group (SMG) in its quarterly analysis of the silicon wafer industry. The report notes that the first quarter is typically weak and that volumes are up relative to the same quarter last year. For the remainder of the year, it is hoped that the silicon industry will follow the projected modest growth in the semiconductor industry.

* Armchair Editors – At first, I was saddened by this article. It seems that everyone is becoming a publisher, further benefiting from the content generated by fewer and fewer real editors. Unfortunately, the original content source is not always cited and no compensation is paid to the original content creators (i.e., the Internet model). Apparently, Flipboard has just launched a new curation resource. Professional curators (another name for editors and writers) might be worried, as this resource encourages armchair publishers to further saturate the market. The end result is that established publishers will have less revenue to pay for original content. However, taken another way, it may mean that “professional curators” (like editors and writers) may further their own brand by using these same armchair-publishing resources.

* Are you looking for a good way to invest 5 minutes of your life? If you are an RF or analog/mixed-signal designer, I humbly suggest that you take a survey on RF chip technology.