Chip Signal
Industry Blogs
get the latest news and advice for everything IP
World’s Most Trusted IP Resource
Home  >  Blogs  >  Whose IP is Better? Check the Scorecard

Whose IP is Better? Check the Scorecard

A recent announcement dealing with the relative technical and market value of Parkervision IP spurs questions about ratings scorecard.

While skimming my email inbox, I experienced that odd feeling of familiarity. It was more a feeling of “presque vu” rather than “déjà vu.” A quick reversal of my email scrolling revealed the source of my familiarity, which was a press release from ParkerVision – a company that offers proprietary RF communication technology IP.

I had covered this company back in the early 2000’s while writing for Penton Media’s Wireless Systems Design magazine. During that time, Parkervision had just introduced its low-power RF-to-baseband conversion Direct2Data (D2D) technology. (see “RFICs Find Applications Everywhere)

Today, the company is still involved with RF technologies and related IP.  But this week’s press release focused on something different, i.e., the company’s ranking among the top 50 telecommunication businesses. (see, “The Patent Board’s Telecommuncation & Communications Industry Patent Scorecard”)

According to a reference linked to the Wall Street Journal, the Patent Scorecard is a quarterly assessment of patent activity based primarily on a combined ranking of the quality and quantity of a company’s patent portfolio. All indicators based on 13-week rolling average. There are over 50 indicators that track, “global patent activity relating to companies’ innovation, technology, and science strengths.”

Just as a point of reference, I compared the rating between Parkervision and Nortel, especially in light of my recent coverage of the latter’s treasure chest of patents. (see, “What is the Freshness Date on Nortel’s IP Patents?“) I grant that this is hardly an apple-to-apple comparison, since each company has IP in related but different areas. Still, both companies are in the telecommunication industry. (It would be interesting to know if the Panel Board has any mechanism to group companies for an apple-to-apple comparison.) 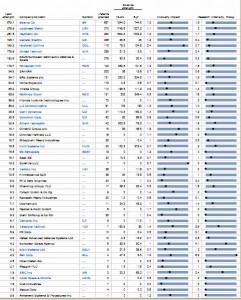 The “tech strength” (far left column) of Nortel Networks Corp was slightly higher than Parkervision’s, Inc. Nortel has granted far more patents in the last year – 165 compared to 18, respectively- but Parkervision’s “science strength” (middle columns) was an order of magnitude higher than the telecom giant. What did this mean?

“Core science” seems like an odd expression to me. I doubt that most telecommunication companies actually engage in basic scientific R&D. Instead, these companies are probably engineering oriented, i.e., creating something useful out of the basic research of others. In terms of Parkervision, “core science” probably refers to algorithmic design and development. But I’ll check this point.

The four, far left columns of the Patent’s Board scorecard attempt to quantify the industry impact and research intensity (average = 1) of specific companies. Remembering my earlier qualification (not being an apple-to-apple comparison), let’s stick with the comparison of Parkervision and Nortel.  In terms of both measures, Nortel’s score was more or less average. On the other hand, Parkervision scored extremely high in both areas. Why has the company achieved such high marks? Their press release provided no answers. I’ve contacted the company to learn more.

The fact that an attempt has been made to rate the technical and market value of telecom patents and IP is commendable. It would be interesting to review the specific indicators, detailed metrics, scoring methodology and other information by which this board determines a company’s ranking. This remains a task for a future blog.

In the meantime, I contacted Jonathan Kaplan, Law Office of Jonathan T. Kaplan, about this approach to gauging the value of an IP company. Understandably, he was reluctant to comment without knowing more about how the Patent Board computes its metrics. Still, he acknowledged that the list could be very useful, especially if, “someone could actually measure such characteristics in a timely way with the publicly-available data.”

Reflecting my earlier concerns, Kaplan agreed that it would be helpful to know the actual data sources used by the board to determine each of the major categories listed in the WSJ report, i.e., Technology Strength, Science Strength, Industry Impact, research Intensity.

But knowing the actual data sources, indicators, subcategories – whatever the label – is only half the answer. It is equally important to understand how each of these sources is weighted to determine the overall score. In other words, one needs to know the algorithms by which the board processes such data to get their final numbers.

Are there other such IP scorecards available in other industries, e.g., the semiconductor space as a whole? The GSA and other organizations provide metrics for the technical value of IP, but not to compare IP companies. If you know of any similar activities that attempt to measure both the technical and market value of IP, please drop me a line.

This entry was posted in General and tagged Kaplan, Parkervision, Patent Board, rating, scorecard. Bookmark the permalink.

One Response to Whose IP is Better? Check the Scorecard