Intel reveals key pieces of its SOC realization strategy with the announcement of a new on-chip interconnect fabric and a growing collection of IP. Should ARM be worried?

Details remain sketchy, but Intel’s ATOM processor-based embedded System-on-Chip (SoC) strategy may be nearing realization, as indicated by recent comments from Intel’s Bill Leszinske, general manager of technical planning and business development at the Atom processor SOC development group. Since the embedded SoC strategy was first introduced in the spring of 2008, Intel has been focused on lowering the power while increasing the performance of its Atom processor. Now, that approach has been significantly enhanced with the inclusion of on-chip interconnect fabric and a growing collection of semiconductor IP. 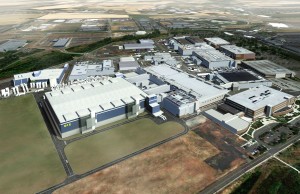 Intel's 22nm development fab in Oregon should play an important role in the ongoing development of the Atom processor and SoC realization.

The interconnect fabric will serve as a “chassis” within which a variety Intel and third-party IP can be swapped in and out for different applications. The company calls this proprietary chassis the Intel On-Chip System Fabric (IOSF). It is analogous to the ARM’s community Advanced Microcontroller Bus Architecture (AMBA) interconnect platform.

Leszinske is quoted as saying that the IOSF is a scalable fabric that supports multicore operation and maintains the PCI-bus order. This last item is critical since Intel’s Atom processor uses the PCI bus to connect to the outside world, for example, to provide embedded programmability via Altera’s FPGA core (see, “Intel Teams Up with Altera”) The popular PCI bus is also an important interface between ARM processors of Xilinx FPGA fabric (see, “FPGAs Move to IP through Processor Interface”)

Perhaps the most revealing part of Intel’s SoC strategy is the IP. The company clearly understands the value of reuse in SoC design. But until now and unlike ARM, Intel has lacked both a mechanism to truly incorporate third party semiconductor IP and a large ecosystem to supply that IP. That situation is significantly changed with the introduction of the IOSF interconnect chassis and the numerous licensing agreements and business acquisitions of the last several years.

Now, Intel has a large portfolio of IP covering graphic, cable modem, video, wireless and Ethernet functionality. Graphic cores are available from both Intel and a licensing agreement with Imagination. Cable modem IP was acquired from Texas Instrument’s Puma product line. Image processing blocks came from the purchase of Silicon Hive. Intel’s most recent wireless acquisition (Remember Mobilian back in 2003?) was the purchase of Infineon’s WiFi and 4G WiMAX technology. Finally, the company’s Ethernet switching portfolio has been recently enhanced with the purchase of Fulcum.

Almost all of the pieces of Intel’s SoC strategy have been revealed. It remains to be seen how well these pieces will actually fit together. For example, will the IOSF interconnect chassis really allow the integration of third party IP and not merely the cores owned or licensed by Intel? Will there be a compelling reason for the IP ecosystem to shift from ARM to Intel’s SoC, especially in the mobile market? What would happen if Apple chips using ARM cores are manufactured by Intel? (see, “IP Adds New Twist to Intel-Apple-ARM Triangle”)

The answers to these and other questions have yet to be revealed.