> Developing an IP strategy is a business concern.

> Patents can be used for protection, to acquire funding and to create revenue.

> There are several ways to protect your IP, such as with patents, trademarks, copyrights, and trade secrets.

> Disclosure risks are substantial even at a trade show.

> Many startups lack an awareness of IP basics.

Intellectual property (IP) awareness and understanding are critical in a world of geopolitical changes and expensive patent infringements. These issues and solutions were the focus of a special panel of experts at the SPIE Photonics West 2017 event. The panel included John Cabeca, Director of the Silicon Valley US Patent and Trademark Office (USPTO) Curtis Bock and Steve Barone, patent attorneys with Lathrop & Gage. What follows is a synopsis of their discussions. – JB

The discussion started with Caberca’s observation that the USPTO had just started to attend the Consumer Electronics Show (CES) in Las Vegas, NV. This year, he noted many startup companies at the show. But participating in such events carries a significant risk for startup exhibitors if they haven’t filed patents prior to the trade show. The problem is that disclosing or selling products based on one’s IP starts a clock ticking for filing patent protection in the US.

“I asked a startup CEO standing in his exhibitor booth for his patent strategy,” explained Caberca. “The CEO said that he haven’t filed a patent. But he did sign-up for kick-starter the day before. I was shocked! All startups must seriously think about patent filings and disclosures. Risks are easily mitigated before coming to a trade show by simply getting a provisional application before filing the full patent.”

Before even filing a patent, one must be aware of the many different types of intellectual property (see Table 1).

The Value of IP

An IP strategy is really a business activity. As such, it should be attractive to both investors and buyers. Further, the strategy should help deter infringement lawsuits. It can increase leveraging power in mergers and acquisitions (M&As). Also, it can be a property right that can add value to a company’s assets.

There are many ways to get value from one’s IP. For example, IP can be used to gain entry into – while detering other from entering – a market. IP can serve as a marketing tool to promote unique aspects of a product or asset.

IP can be used to assert and enforce one’s rights against an infringer or competitor. It can even be used as collateral to obtain funding or to reate revenue by selling or licensing other property. But before any these values can be realized, one needs to figure out the strength of their patents and how the IP will be used.

“Your IP can create an umbrella,” explained Barone. “If the trademark is protected, then your hard work can also be protected.”

First, one needs to access the company’s IP assets and prioritize them. During this activity, it helps to know your competition and understand what they are up to. Also, try to gauge the pace of innovation and opportunities for growth when prioritizing your IP.

One of the most challenging part of developing an IP strategy is to determine the best way to protect your IP:

It may turn out that you need more than one form of patent protection such as utility, design and plant. The best way to protect your IP is not always obvious. For example, a very detailed and narrow patent can make it easier for a competitor to innovate around it.

“On the other hand, a very broad patent with too few details is not good either,” added Cabeca. “One example might be the way a website is displayed on a cell phone. That may not be patentable. You need to find the sweet spot where the patent is broad enough so competitors come to you but not too specific since that’s easy to innovate around.”

“Maybe 30 years ago, a company could be fully protected by a patent,” noted Barone. “Today, it’s about portfolios and other aspects of IP. The IP strategy should be mapped out in the business plan.”

“Remember that 9 out of 10 patents have flaws,” explained Bock. “You need to think enough ahead so that when the patent is issued it will still cover valuable territory. And the average life of a patent is about 20 years.”

Once the plan is developed, you must set goals and then implement them. Don’t be afraid to get help from a practitioner.

The actual path to a patent is fairly straightforward (see Figure 1). After you’ve moved from a new idea to IP plan, you have the option of filing a provisional application, which is used to satisfy the “first to file” requirement. It’s the same as for a written disclosure. [Editor’s note: in 2011, the US switched from a “first-to-invent” system to a “first-to-file system for patent applications filed after March 16, 2013 via the America Invents Act.]

If you are an inventor, you must eventually file for a utility patent via a non-provisional application. The USPTO will look over the application carefully before eventually issuing a patent. 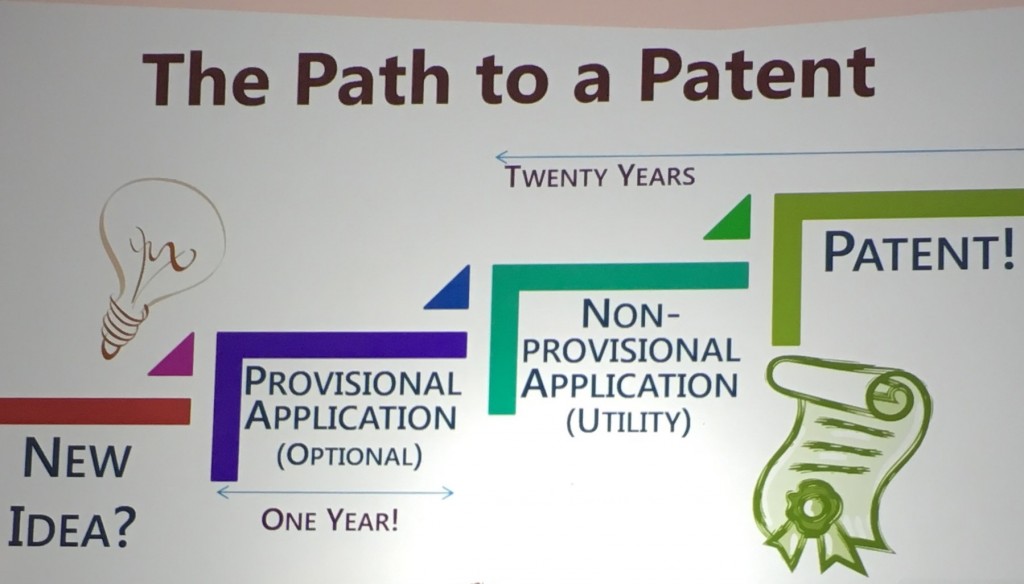 Figure 1: Path to a patent.

There are risks associated with a disclosure. Those filing for a patent need to be careful about what they say before filing and how to tell when they have said too much. In the former case, if an invention has been publicly disclosed or on sale for more than one-year before a patent application is filed, one typically cannot file a patent application.

Here are some examples of public disclosure:

“Don’t disclosure your patent before you have something on file,” cautioned Bock. “Otherwise, another person in room could be considered a co-inventor.”

How can you tell if you’ve said too much about a patentable idea? To answer this question, Cabeca shared the example of stating that your 3D printer was 3 times faster than the competitions. This broad disclosure is “ok” since you haven’t said anything about how it is faster. However, if you go on to explain the servo mechanism in detail, then you probably have said too much. The “disclosure” clock has started and if you don’t file for a patent in the US within one year, it will be too late to do so.

The sales of an as yet unpatented idea will also start the disclosure clock. For example, consider a 3D image idea that received $500 from crowdsourcing based on the claim that the printer is 3 times faster than the competition. While you haven’t given away any real detail, you have nevertheless disclosed your idea. Once the product has been offered for sale, the 1-year grace period in the US (first-to-file inventor system) for filing a patent has begun. In Europe, if you start the disclosure clock prior to filing, then you can’t get patent protection at all.

Once the patent has been issued, the holder may choose to grant patent rights to another person or company under a license. Patent licensing strategies allow the holder to control how their invention is used and how rights are transferred.

Two approaches to transferring rights are offend deployed: offensive and defensive strategies. An offensive strategy protects a businesses’ core technology while driving profits. Conversely, a defensive approach tries to capture as yet unpatented territory surrounding the core technology. This is often done by patenting incremental improvements which extends the existing patent and can block alternative designs, effectively shielding the core technology from competitors. Offensive and defensive IP strategies can be used together.

What IP evaluation strategy is used by the USPTO to evaluat patents in the multi-disciplined fields of photonics and optical technologies? Cabeca explained that work was assigned according to the focus areas. For example, a patent on optical crystals might go to both a chemical patent expert in the USPTO as well as an electrical expert who would focus on the way light was directed through the crystal. He explained that the USPTO had a classification system where hundreds and thousands of discrete components have already been categorized. Patent experts within the USPTO focus on specific areas.

“Don’t be afraid to reach out and talk to the patent examiner,” said Cabeca. “It often helps to have a face-to-face interview, or provide a video demonstration so the examiner can better understand what you were trying to claim when you wrote the claim the way you did.” Of course, examiners aren’t always encouraged to talk to the inventor or patent claimer.

The panelists noted the strong growth in filings in the virtual reality field (see Figure 2). Another growth area was 3D printing with over 300 filings in 2016. Filings are increasing significantly for autonomous vehicle IP, although regulators are still adopting to this new technology market. Not surprisingly, patent filings for 3D cameras – a key technology for autonomous vehicles, smart phones and other products – are also climbing in the photonics IP space. 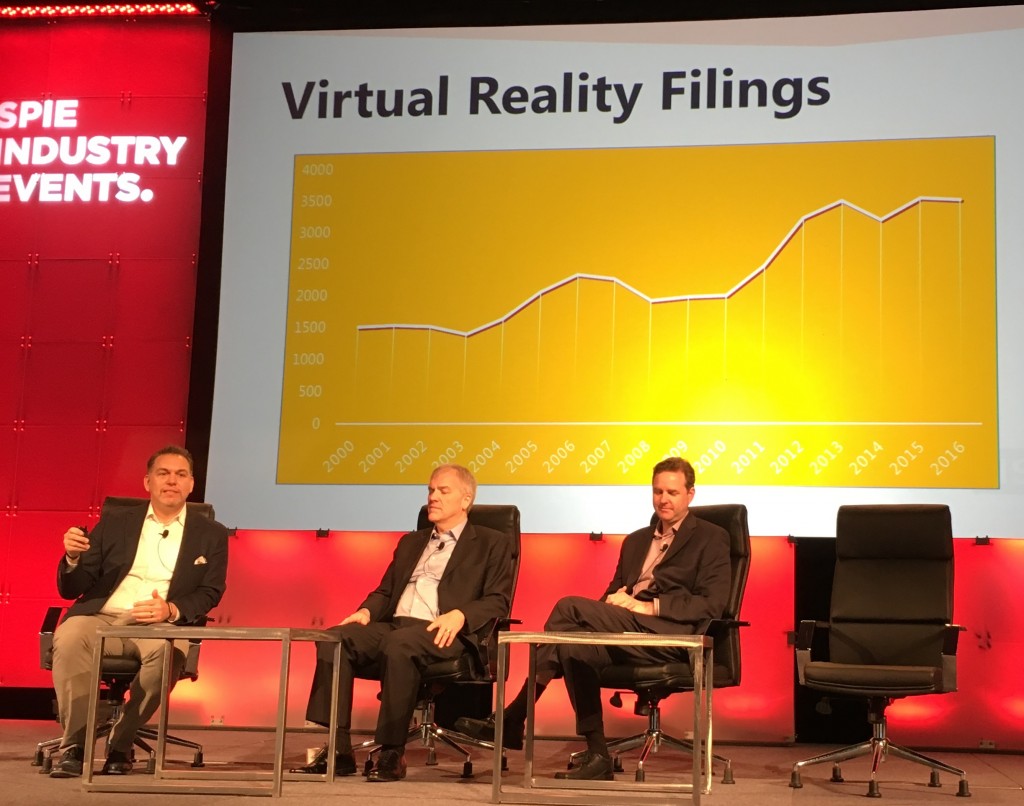 When asked about patent filing resources, the panelists suggested an IP Awareness Assessment tool from the USPTO/NIST . This tool is designed to help manufacturers, small businesses, entrepreneurs and independent inventors easily assess their knowledge of intellectual property (IP).