This was a tough year for most initial public offerings. However, trends in semiconductor IP and social media development suggest critical changes are taking place.

This year was not kind for initial public offering (IP0) activities. In the past, IPOs represented the main mechanism for venture capital (VC) firms, banks and other investor types to recoup their investments in promising start-up companies.

Fewer successful U.S. IPOs will be realized this year than in 2010, reports the Wall Street Journal. Further, the amount of money raised this year was about 40% less than in 2007, which represented the high point in IPO ventures.

These gloomy numbers are culled from all IPO offerings in the U.S. The semiconductor market fared little better. According to the Global Semiconductor Alliance (GSA), November 2011 funding totals decreased year-over-year (YoY) at a rate of 73.8 percent. For the first 11 months of 2011, 79 semiconductor deals raised $988.2 million, a dollar amount decrease of 16.3 percent YoY.

One of the few semiconductor companies to stage an initial public offering in 2011 was Freescale Semiconductor Holdings.  Unfortunately, the initial offering was so disappointing that none of the company’s private equity owners, including the Blackstone Group, the Carlyle Group, TPG Capital and Permira, sold shares in the offering.

This was also a challenging year for the other exit scenario for startup companies, i.e. mergers and acquisitions (M&As.) In November 2011, the number of semiconductor M&As announced (i.e., M&As involving entire fabless, IDM and semiconductor supplier companies, not sectors/product lines or foundry facilities) decreased by eight YoY, according to the same GSA report. For the first eleven months of 2011, 98 semiconductor M&A deals were announced, an 8.4% decrease YoY.

Contrast these disappointing numbers in IPOs and M&As with the recent successes in social media IPOs. This year, social media companies like LinkedIn and Yandex – a Russian search engine – raised several billions of dollars in initial offerings for their investors. 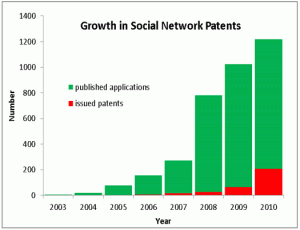 The rise of social media IPOs was the major theme at the recent AlwaysOn Venture Capital event, which I’ll cover in greater detail in future blogs. This trend in the rise of social media companies represents a significant shift in startup funding trends as well as technical resource staffing requirements in an ever-global development environment.

Semiconductor IP shares similar traits with social media applications. Both require relatively modest amounts of startup money to launch. Both are “software” rather than hardware intensive. The unique challenges facing semiconductor IP companies include: the highly technical nature of the IP; the constant needs to update many kinds of IP (like interface) with changing process nodes and fab constraints; and tight profit margins for all but the major, established players like ARM.

Some have speculated that there may be an intersection between the semiconductor IP market and related social media applications. The question may not be as far fetched, as many believe. The previously mentioned trends in future funding strategies and technical resources may shed light on such a convergence, which is why I’ll continue to report on these trends in 2012.