Even though there was no specific mention of hardware and software intellectual property (IP) at this year’s Integrated Electrical Solutions Forum (IESF), all discussions about the future growth of both infotainment systems and self-braking, parking and driving autonomous vehicle operations will only be possible by a heavy reliance on chip and FPGA IP.

Not once did I hear the expression nor see the phrase “IP” while attending the 2011 Integrated Electrical Solutions Forum (IESF) in Dearborn, MI. The absence of IP nomenclature was hardly surprising as the forum focused on Electronic/Electrical (E/E) systems design and wire harness engineering issues. Still, the value and growth of electronic hardware and software reuse was apparent thought-out the event.

From the beginning of the one-day show, the growing importance of electronics in automotive systems was stressed. The first keynote speaker, John McElroy, the host of the Autoline Daily show, ended his presentation by talking about cars that can brake, park and even drive by themselves. One can image the extensive array of sensors, networks, analog and digital subsystems that are needed to accomplish these autonomous tasks.

McElroy even when so far as to say that these vehicle-to-vehicle communication-based systems would be game changers for the automotive industry and might be available by 2014. Perhaps that is why Google is a major developer in several of these initiatives. http://www.youtube.com/watch?v=X0I5DHOETFE

In today’s automobiles, electronics are the chief differentiator between competing auto makers. In terms of numbers, automotive electronics per car typically include hundreds of sensors, tens of Electronic Control Unit (ECU) processing systems, miles of cable harnesses and extensive network systems – not to mention up to 10million lines of software code. 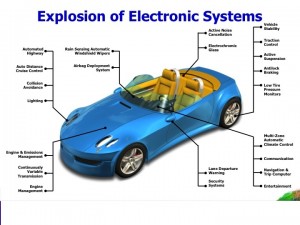 The complexity hinted at by such numbers, coupled with the safety concerns of the industry, make hardware a software reuse a must. Trusted hardware IP and software libraries will be the most obvious way to achieve the necessary economies of scale and shorten development cycle demanded by a consumer market.

The automotive space is still an industry of siloes, from electrical, mechanical, industrial and computer science disciplines. In practical terms, this means that hardware and software engineers don’t often talk with one another. Such communication challenges are why Wally Rhines, CEO of Mentor Graphics, noted in his keynote that the “biggest problems still occur in the system integration phase of the V-diagram life cycle.” The integration phase is traditionally the part of the system or product life cycle stage where hardware and software subsystems first come together. Not surprisingly, this is often where interface problems first appear.

Interface definition means connecting the right bits to the right bus, activities that are best modeled in the early architectural design phases of the life cycle. Such models include virtual prototypes, which simulate the yet undeveloped hardware – usually via IP and libraries. But virtual constructs are still relatively new to the automotive industry, where prototypes are still predominantly physical. However, the complexities of electronic systems are making physical prototypes a thing of the past.

Paul Hansen, in his annual report at the end of the IESF, noted that automotive giants like Ford are relying on newer players like Bsquare, an embedded software vendor, to help create infotainment players. Apparently, Tier 1 software provides are struggling with the hardware-software challenges of ever more complex and integrated infotainment systems.  Here is yet another segment where hardware and software IP reuse can bring significant benefit.

One doesn’t need to look very far to find a growing market for automotive infotainment IP. Common elements in this segment include ARM, ARC and Tensilica (among others) processors for audio systems, audio amplifier, communication controllers for automotive specific networks like CAN and more general standards like Bluetooth, DACs, microcontrollers, memory, and even embedded security.

IP continues to play an important role in automotive electronics, even if the phrase is seldom used at market events.